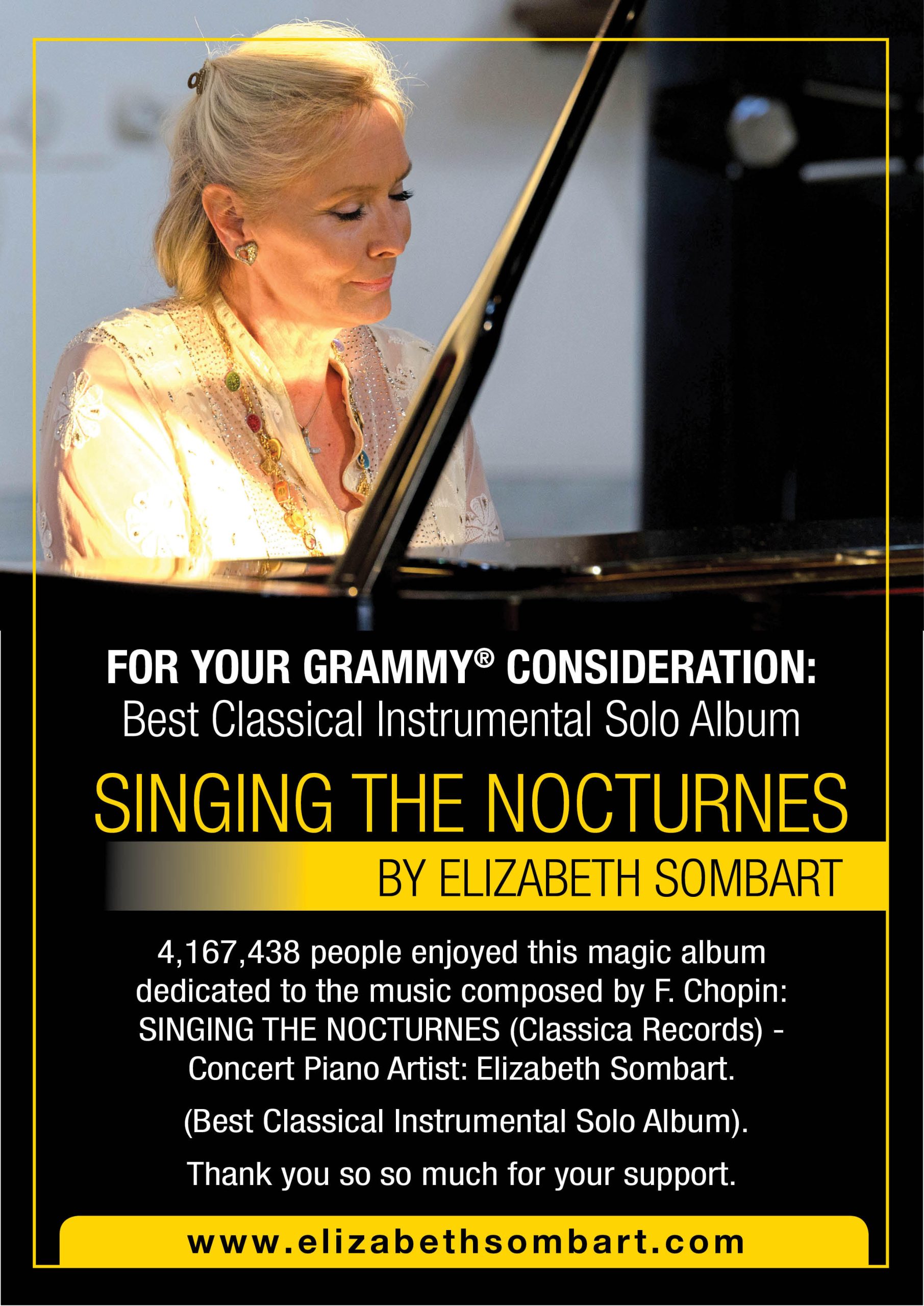 Teasing us with simplicity in “Op. 27: I. Larghetto in C-Sharp Minor” or cutting through the crisp silence with a devastating form of decadence ala “Op. 55: II. Lento sostenuto in E-Flat Major,” Elizabeth Sombart’s interpretation of Frederic Chopin’s Nocturnes has had critics and classical fans around the world very happy in 2022, and for good reason.

Where Chopin was a standard-setting influence over the world of music and continues to be revered as one of the most important composers of all time, Sombart looks to be as much as a pianist in her work, and this Grammy Award-nominated work is by far her most complete and thoughtful collection of recordings to date. Accompanied by the piano and driven by the same fortitude that powered her performances with the Royal Philharmonic and produced a Lifetime Achievement Award for her work all the way back in 2006, you could say that this performer’s legacy is presented in no uncertain terms in this album, and if you’ve been among those hearing about its importance to the collective works released in 2022, you’re not alone by any stretch of the imagination.

I was immediately taken with Sombart’s covering Bach as well as Beethoven in previous releases, and her training under some of the most profound players in the European world definitely does her plenty of favors in Singing the Nocturnes. She’s always getting after a melody with the kind of melancholic warmth that accompanies a final exchange between two longtime lovers about to separate as if she knows that any given performance could be her last chance to communicate with both her medium as well as the audience that has allowed for her to go as far with music as she has. There’s more emotion in her wordless performances than there is in the vast majority of verse-driven pop music you might hear when browsing around the FM dial, and although her French peers have created quite the provocative underground scene for themselves in the past ten years specifically, few – if any – that have broached the works of Chopin have devoted as much of their own personalities to the work as Sombart does so flawlessly here.

The confidence this player has when she’s at the piano would be enough to make anyone interested in what she has to present to the world, but it’s the humble strength through which she’s able to communicate much of the artistic message Chopin had in the Nocturnes that feels like the true centerpiece of her performance in this LP. Contemporary works have been lackluster in terms of production quality in recent times, but the definitive varnish over the keys in this release doesn’t take anything away from the organic charms Elizabeth Sombart has made into her secret weapon no matter what the material she’s recording happens to be. She makes it clear to her audience what’s close to her heart whenever she’s playing, and Singing the Nocturnes is her most cohesive demonstration of self and abilities to get the attention of international critics and the Grammys so far.

Dianña Returns With New Christmas Single
“Just Like You” by Chris McCooey
Change is Everything with Some Days Are Darker
Elektragaaz Releases “The Synaesthetic Picture Show: Part 6”
Exclusive Interview With Danny Hughes (DCPA)