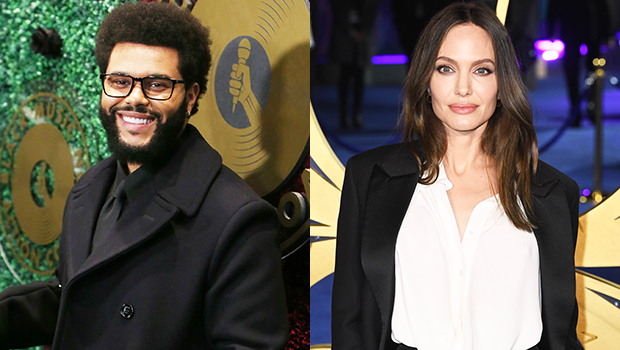 Months after romance rumors about Angelina Jolie and The Weeknd first surfaced, the singer makes a reference to dating a ‘movie star’ on his new song ‘Here We Go…Again.’

At the end of the verse, The Weeknd also adds that the relationship he’s singing about was something he didn’t expect. “I told myself that I’d never fall,” he adds. “But here we go again.” Although The Weeknd and Angelina have never publicly spoken on the status of their relationship, they’ve been seen out and about together on more than one occasion. The first outing came on June 30, when the two were photographed leaving the same restaurant around the same time. They reportedly spent “hours” inside the hotspot together.

Just days later, The Weeknd attended the same private show as Angelina and two of her daughters. The stars were not photographed together, but were both in attendance for the exclusive show. Then, at the end of September, The Weeknd and Angelina reunited for another dinner date. Although they arrived separately, they reportedly spent more than two hours inside together.

This is Angelina’s first public potential relationship since her split from Brad Pitt in Sept. 2016. Meanwhile, The Weeknd famously dated both Bella Hadid and Selena Gomez before being linked to Angelina.

This is The Weeknd’s fifth studio album. He previously released After Hours in March 2020, which was preceded by Starboy in Nov. 2016. The singer has been cranking out the music recently, as he also dropped a greatest hits mixtape, The Highlights, in Feb. 2021, as well.

Kourtney Kardashian, Travis Barker, Kim and Sisters Stroll Portofino Ahead of Wedding
Book Riot’s Deals of the Day for May 19, 2022
Why Scott Disick Won’t Attend Kourtney Kardashian’s Wedding In Italy: He Feels So ‘Alone’
Julie Andrews’ Husbands: Everything To Know About Her 2 Marriages
Tim Tebow Guarantees Tom Brady Will Be ‘Amazing’ Broadcaster