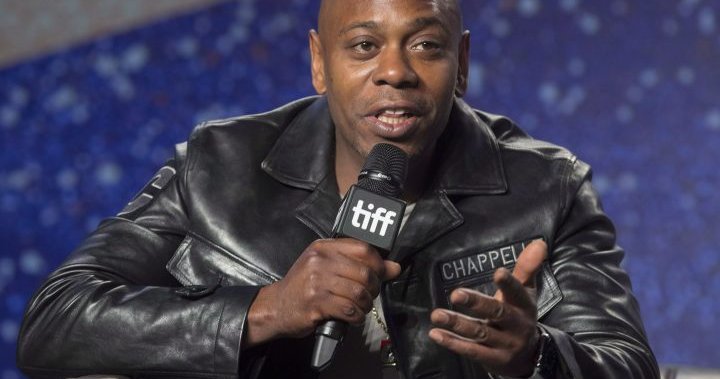 TORONTO – Dave Chappelle has booked Scotiabank Arena in Toronto to screen his latest documentary next month, even as he continues to draw controversy over comments in his latest Netflix special deemed anti-transgender.

The U.S. standup comedian, who issued a statement this week saying he’s been a victim of “cancel” culture over his comedy bits, will show his film “Untitled” at the 19,800-person arena on Nov. 15.

The Canadian premiere is part of a wider tour of the documentary that includes a live performance by “Dave Chappelle & Friends.”

Chappelle’s only date in Canada was met with some criticism online after Scotiabank Arena posted the announcement on social media and turned off the comments.

Some interpreted the move as a way to skirt any controversy over hosting the comedian on their premises.

A statement from the venue’s owner Maple Leafs Sports & Entertainment says it hosts a “wide variety of public events” and that “in some cases certain aspects of the content may be offensive to some.”

“Chucky” Has Been Renewed for a Second Season Ahead of This Week’s Season 1 Finale!
The Supreme Court’s Conservative Goon Squad Seems Poised to Destroy Roe v. Wade
‘Scream’ Featurette Reminds Us That Anyone Can Be Under Ghostface’s Mask; Character Posters Profile the Suspects! [Video]
Aaron Carter Paces In His Driveway On A Phone Call After Split From Fiancée Melanie Martin
‘Yellowstone’ Recap: Beth & Rip Plan To Marry Soon & Jamie Confronts Garrett