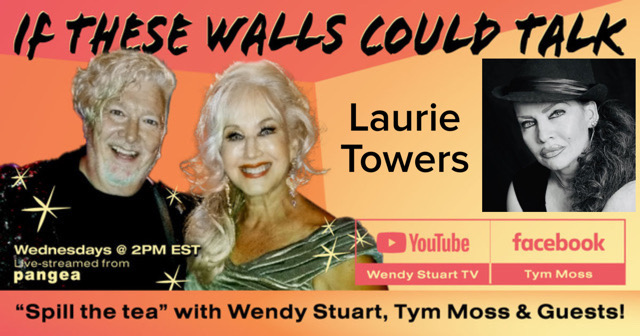 Laurie Towers will be a featured guest on “If These Walls Could Talk” with hosts Wendy Stuart and Tym Moss on Wednesday, December 21st, 2022 at 2 PM ET live from the infamous Pangea Restaurant.

Wendy Stuart is an author, celebrity interviewer, model, filmmaker and along with If These Walls Could Talk she hosts TriVersity Talk, a weekly web series with featured guests discussing their lives, activism and pressing issues in the LGBTQ Community.

Laurie Towers is a New York City business owner, award-winning entrepreneur, fitness columnist, producer, as well as an advocate for women’s equality.  She is the founder and CEO of the franchise Physical Advantage PC for which she singularly developed a brand of sports massage, athletic training and alternative health. In addition to being a partner in New Masses Media Public Relations, she is also the producer and host of the feminist podcast “She’s Raising the Bar” and producer and co-host of “ Jazz Just After Dark” and WFMU’s “Beneath The Underground” where monthly she has a format devoted exclusively to women in music called “XX-Centric Behavior”. Towers also has served as guest speaker at numerous events for the rights of women and girls attempting to rebuild their lives.

Included in this, she is a self-taught musician, active in performance for some four decades. As an electric bass guitarist, her markedly melodic approach earned her the description “rhythm-stirrer” by one concert reviewer and “bass wizard” by another. These days, she performs most often with the post-punk, neo-Beat duo Flames of Discontent as well as “ The Red Microphone”.  Towers’ recording credits include the eponymous CD by “Amina Baraka & the Red Microphone” (ESP-Disk 2017) as well as “Revenge of the Atom Spies” (2007) and “I Dreamed I Heard Joe Hill Last Night (2005) by Flames of Discontent, an EP by Radio NOIR (2011) and various silent film scores with the Dissident Arts Orchestra (2010-18), and most recently “And I Became Of  The Dark” (2021) and most recently “A Bleeding In Black Leather “ 2022 both by The Red Microphone on ESP-Disk.

Watch Laurie Towers on “If These Walls Could Talk” with hosts Wendy Stuart and Tym Moss on YouTube here: