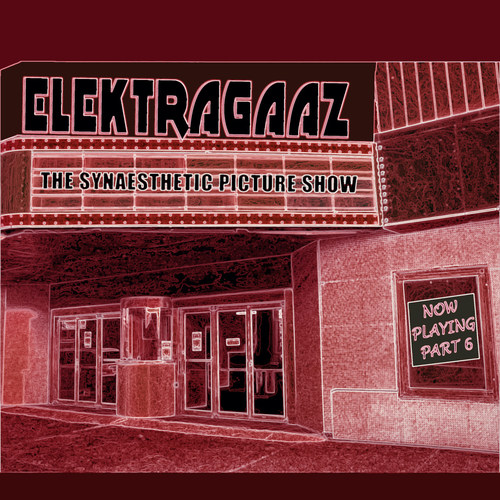 Embracing conventionality in any manner is essentially taking the easy way out in any genre these days, but few prove this notion true quite as emphatically as Elektragaaz does in The Synaesthetic Picture Show: Part 6. Comprised of noisy bastions of electronica and progressive songcraft in “Death and the Gunfighter,” “The Forge of the Red Horseman,” and “Sunset Wheels” whilst also nailing the perfect concept for melding ambient and post-punk together in “The Dark Forest,” “New Boots – A Holiday Song,” and “Lucio the Happy Octopus,” Elektragaaz brings new meaning to the oft-used term ‘hybridity’ in this release, and for my money offer up what could be the heaviest indie release of 2022 to date. The Synaesthetic Picture Show: Part 6 is bluntly arranged and lives up to every expectation its name would imply for those who have been keeping up with the series, and I can’t say that for every record I’ve been listening to recently.

Sublime elements lend a bit of foundational charisma to the mix in “New Boots – A Holiday Song,” “American Humoresque,” and “Death and the Gunfighter,” but I don’t think the tempo was ever meant to lock down the center stage in this record. Instead, its role is to frame the noise beside the melodies as excellently and exquisitely as possible without using rhythm to dictate the mood of the music entirely, and if there’s ever been an example of how to pull something like this together without sounding indebted to digital technologies, it’s in The Synaesthetic Picture Show: Part 6. Contrast and conflict are closely related in the studio, but Elektragaaz is using both to their advantage here.

The Synaesthetic Picture Show: Part 6 is a remarkably full-bodied effort from start to finish, to such an extent that I would say breaking up a one-two punch like “Death and the Gunfighter”/“The Forge of the Red Horseman,” or “American Humoresque”/“Sunset Wheels” would be to reshape the entire theme and story of this album as Elektragaaz intended for it to be interpreted. Call them a progressive act if you want, but no matter what kind of labeling this group gets I think their conceptualism stands out as one of the more seamlessly fitted attributes within their skillset period. They know how to write more than scattered chapters in an anthology; this is cohesive, gripping, and holds my attention from the first song to the last moments of “New Boots – A Holiday Song” at the end of the EP.

There’s no other way for me to put it – The Synaesthetic Picture Show: Part 6 is one of the most intriguing and provocatively unkempt alternative records I’ve heard in the past two years, and while it doesn’t check any mainstream boxes from what I can tell, I think it’s going to become a watershed release for this act’s ascent through the indie hierarchy in the 2020s. I was surprised at how listenable an EP this is for it being as far to the left of the typical pop effort as it is, but when it comes to making intricate music compelling, you can usually trust detail-oriented players like those in Elektragaaz to come through every time. They’ve yet to let me down, and I believe they’re going to get a lot of praise for what they’ve done in this sixth installment in their critically-acclaimed series of records.