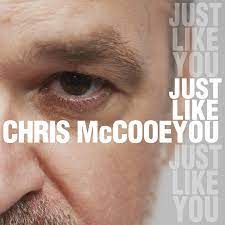 To conjure the same sounds and feelings as someone like Roy Orbison, that’s a heavy weight to bear — six decades after his meteoric rise to fame, nobody has been able to fully capture the same exact vocal stylings Orbison could, with singles such as “Pretty Woman” and “In Dreams.” The niche was impressive, and his reach would stretch on forever, even sixty years later. For San Francisco musician Chris McCooey, the Orbison blueprint feels predestined, and the lead single for his new album Missing Pieces, track “Just Like You,” finally feels like McCooey making good on the comparison as the single taps into McCooey’s various Orbison-isms in both his vocal performance as well as the single’s overall musical composition.

“Just Like You” is a low-tempo song of which McCooey said, “Musically and thematically, the song looks to Roy Orbison as inspiration for its dark, complicated themes around love and relationships and its sweeping, cinematic arrangement that features a string quartet.” The lyrics detail the quest of searching for a missing piece, which ends up being a piece that may or may not have ever existed in the first place — “There ain’t a single day goes by that I’m not trying to fill a hole; trying to recognize my eyes and to understand my soul. I’m guessing there’s a missing piece that I may not ever find, I’ve been wondering all my life if I am just like you.” The emphasis on the “you” in the chorus beckons comparisons to Orbison on top of the slower, last dance-type of beat, and the way the entire song pulls itself together is a beautiful homage and perfect reclamation of Americana in a modern way.

Releasing a music video alongside the single in preparation for Missing Piece’s release date in late December, Chris McCooey spins the narrative of a man lost in an endless jigsaw puzzle as he relentlessly searches for the final piece. The metaphor is profound and the performance both in the song and video elicits emotional responses from the listener, as the subject matter tackles something everyone has felt at one point or another in their lives. It’s a dense, serious subject to tackle in a three-minute window, but McCooey does it with time to spare. The balancing act of giving listeners something endearing, relatable, and catchy feels fairly impossible by today’s standards, but “Just Like You” shows that not only is it possible, it’s Chris McCooey’s signature songwriting style.

While the song evokes plenty of comparison to Orbison and other past ‘50s and ‘60s crooners from the harmonious meshing of soft rock vocals over a string quartet, guitars, and drums, Chris McCooey still makes the track his own and never leases it out to any one influence. He’s a talented songwriter and this latest single is only a branch within his steadfast redwood tree of a discography — the way “Just Like You” amplifies expectations for Missing Pieces tenfold is profound, and the album release can’t come soon enough!