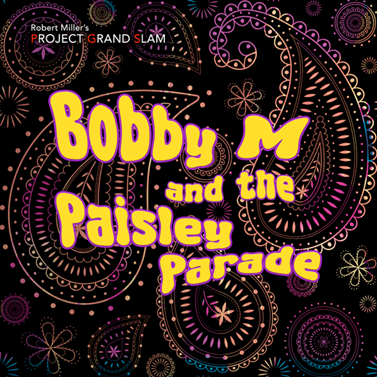 Cutting into the central harmony that supplies “I Just Want to Love You” with its greatest vitality, a brisk but boldly colorful melodicism is here to tie every eccentric element in Project Grand Slam’s sound together. This isn’t the first time that Robert Miller has delivered something ambitious in subtle packaging, but while the anticipation leading up to his most recent studio offering Bobby M and the Paisley Parade has been considerable, he hasn’t bitten off more than he can chew in its ten songs at all. This reimagining of the PGS brand sees Miller manifesting their destiny through the lens of the British Invasion in this record, and it all starts with giving us everything with maximum strength.

Although steeped in a lot of cryptic subtexts, Bobby M and the Paisley Parade’s “Feeling So Good,” “Chasing the Light” and “This Time” make it clear that this band wanted to give us a solid concept album this winter. There’s simply too much love for the play and, even without any serious virtuosity, the mathematics of the material here for me to draw any other conclusion. Whether it be the percussion, the bassline, or another fleeting componentry in “What Can I Say,” the most formidable instruments are a constant shadow in this LP, stalking us with harmonies and eagerly hinting at a greater sense of emotionality incomprehensible through the absorption of linguistics alone.

I love the beefiness of “It’s So Important,” “This Time” and even “Feeling So Good,” and when matched up with the way “Annie and Leni” and “Waiting for Me” were mixed, we start to get a pretty good idea of what Miller’s crew would like to sound like once they return to the live stage for this new chapter. Despite the glow of the verses in “I Just Want to Love You,” a rock mentality keeps the audience somewhat separate from the artist crooning behind the mic, and it’s in this field of separation in which we feel just how much intimacy exists in the instrumentation separate from any words.

Honestly, I would particularly like to hear “Chasing the Light” in concert a lot sooner than later primarily to get some juxtaposition between the studio and stage versions of the song. My gut tells me that Miller isn’t going to hold back from getting a little experimental with the general boundaries of this content when he has the right venue to do so, and I think this could be the best track here in this sense.

I’ve been following the work of Miller and Project Grand Slam for years now, and I must say that they’ve yet to disappoint me when it comes to putting together a complete, engaging full-length studio album from scratch. Bobby M and the Paisley Parade doesn’t shake the floorboards with its volume or crush us with its rampant solos, but its pushy presence is nevertheless a dominating force to be reckoned with even in the poppiest of moments within the tracklist (“Annie and Leni,” “My Love,” “What Can I Say”). Project Grand Slam should be credited with dropping one of the great indie rock sets of 2022 here, and I don’t mind being among the first writers to say so.