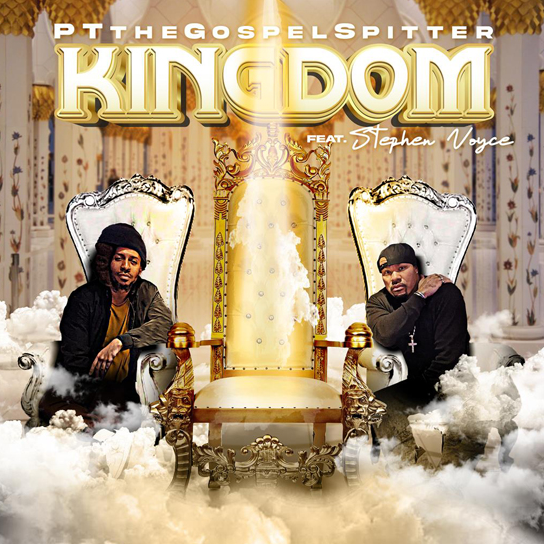 PTtheGospelSpitter is, arguably, one of the more unusual monikers I have come across listening to music in recent years, especially for a performer so steeped in R&B and gospel traditions. It is ultimately just a name, however. The performer behind that handle, Ashante P.T. Stokes, earned the right to call himself whatever he liked long ago when he attended church in his native Atlanta, Georgia. Touring the United States and abroad with his mother, a gospel singer in her own right, is probably the pivotal trigger for everything else that followed.

Turning his life over to Christ later on sealed the deal. It likewise set him on the path leading to where we are today with the release of his latest single entitled “Kingdom”. It is another gospel and R&B influenced song from a songwriter whose powers are obviously expanding with each new release and the arrangement provides ample evidence for that statement. He could have taken a much easier path and appealed to the lowest common musical denominator.

Instead, there are a number of unexpected twists and turns in this keyboard and synthesizer laden track. Despite the obvious lack of any “traditional” instrument, the track has an outstanding physical quality and packs quite a punch. Contrast that with the lift present in the vocal arrangement and it makes for an incredible studio work. The capper, however, may be the addition of guest singer Stephen Voyce.

The Canadian born vocalist shares a lot of the same stylistic ground as Stokes, but there are crucial differences. He is much more of a pure pop singer than his duet partner and the sparks they gave off during the course of this song justifies much of its aural existence. The song, however, is ultimately nothing without PTtheGospelSpitter’s lyrics at its heart. He’s making peace with himself, I think, far more than God here, though the latter is certainly an unquestionable part of the song.

I love his writing because anyone can, essentially, relate to what’s singing about. He does not deliver it in a heavy handed fashion, either, but instead sings his parts with the emotion of a man fully invested in the moment. There are no half measures here. I hear a man who gave this song much consideration before putting the words down and has likely slaved long into the wee hours of evening trying to get it right.

He’s succeeded. The vocal arrangement he’s crafted for himself and Voyce is another reason to recommend the song. Some listeners might feel like the restless creativity and imagination on display with the vocal arrangement might be a bit much, but they are wrong. I hear someone who has taken the gospel and R&B traditions, fused them, and then proceeded to turn the synthesis upside down to reach his own ends. There’s nothing dull or predictable about this single. PTtheGospelSpitter and guest singer Stephen Voyce are on fire during “Kingdom” and they will light up the day of anyone who cares to listen.