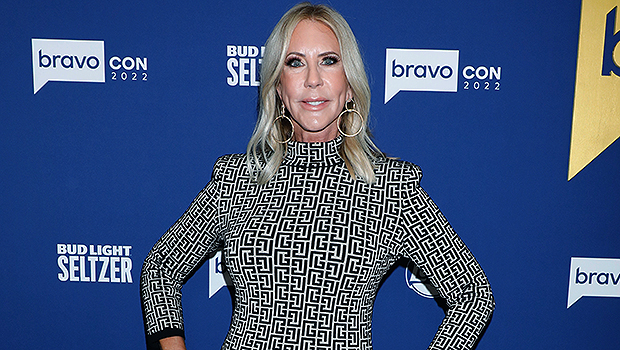 Vicki Gunvalson, 60, clarified what’s actually happening, amid rumors she could return to The Real Housewives of Orange County. The blonde beauty spoke to Page Six at BravoCon on the topic, and while she admits she “filmed” some scenes, she says it stops there. “I wasn’t cast as a full-time ‘Housewife’ or even a ‘friend of,’” she told the outlet on Friday.  “I filmed a scene with Tamra and Shannon which was fun and I miss filming. But nothing more.” Vicki reportedly filmed with current cast members Tamra Judge, 54, and Shannon Beador, 58, in September.

She also clarified that there’s no bad blood between the trio. “We’re good! We’re all good,” she said. “I was in Tamra’s room this morning and then I was out with Shannon last night. So everything’s fine. Everything’s been fine.” She did acknowlege, however, that she and Shannon “stopped talking” for a time. “Tamra and I were never really in a bad place,” she explained. “We were fine. Shannon and I just stopped talking for whatever reason. And there really was no falling out or even a specific issue. We just reached out to each other and we’re back at it.” Fans will remember that Vicki was fired from the iconic Bravo series in 2020, after starring for nearly a decade and a half. She later returned to Ultimate Girls Trip Season 2 with Tamra.

Vicki has had multiple personal shakeups since she left the show.  After her split with her fiancé Steve Lodge, 64, a source told us that she had been “constantly crying.” “She was really struggling,” the insider told HollywoodLife EXCLUSIVELY in October of 2021. “She shared the Steve breakup with the ladies upon arrival. She was so upset and constantly crying that she could barely participate in anything because she was so upset. The ladies tried very hard with her and to include her, but to no avail. She wanted to be left alone.”

Still, at BravoCon, the reality icon seemed to be in good spirits as she greeted press members at the event on October 14 in a video posted to her Instagram account on Friday. “Lots of celebrities, lots of fun,” she said as she panned her camera across the crowded carpet. “You have been with this franchise longer than anyone…you are the queen,” gushed one of her 1.1 million followers in the comments thread.