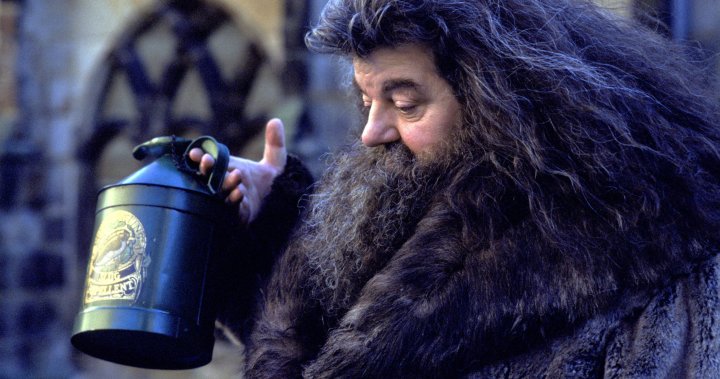 Scottish actor Robbie Coltrane, who played a crime-solving psychologist on TV series Cracker and the beloved half-giant Hagrid in the Harry Potter movies, has died.

Coltrane’s agent Belinda Wright said he died Friday at a hospital in Scotland. She did not provide a cause.

Coltrane came to fame as a hard-bitten detective in the 1990s series Cracker, for which he won best actor at the British Academy Television Awards three years running.

He played gentle half-giant Hagrid, a mentor to the boy wizard, in all eight Harry Potter films, released between 2001 and 2011.

Other roles include a Russian crime boss in the James Bond thrillers GoldenEye and The World is Not Enough.

Coltrane gained rave reviews for playing a beloved TV star who may harbour a dark secret in the 2016 miniseries National Treasure.

Wright said that “as well as being a wonderful actor, he was forensically intelligent, brilliantly witty and after 40 years of being proud to be called his agent, I shall miss him.”

“Robbie was one of the funniest people I’ve met and used to keep us laughing constantly as kids on the set,” it reads. “I’ve especially fond memories of him keeping our spirits up on ‘Prisoner of Azkaban,’ when we were all hiding from the torrential rain for hours in Hagrid’s hut and he was telling stories and cracking jokes to keep morale up. I feel incredibly lucky that I got to meet and work with him and very sad that he’s passed. He was an incredible actor and a lovely man.”

I hope it’s OK to spout memories: I used to ride with Robbie Coltrane between Manchester and London in his sort-of-restored MGA. I’d roll him cigarettes while he discoursed on the ways of the world, and I don’t think I’ve ever laughed or learned so much in my life.

I first met Robbie Coltrane almost exactly 40 years ago. I was awe/terror/love struck all at the same time. Such depth, power & talent: funny enough to cause helpless hiccups & honking as we made our first TV show, “Alfresco”. Farewell, old fellow. You’ll be so dreadfully missed

This clip of Robbie Coltrane in the Harry Potter reunion was really impactful. Even more, now. ❤️pic.twitter.com/JwhCNq1Gec

Rip to the great Scottish actor Robbie Coltrane. He played the curmudgeonly ticket taker in “Let It Ride”. His deadpan observational humor was a brilliant counterpoint to the frantic gambling degeneracy of @RichardDreyfuss. pic.twitter.com/Zaqxj7TRMT

We are hugely saddened to hear of the passing of the magnificent Robbie Coltrane who played Hagrid with such kindness, heart and humour in the Harry Potter films. He was a wonderful actor, a friend to all and he will be deeply missed. pic.twitter.com/CCofb6BMo6

Wright said Coltrane is survived by his sister Annie Rae, his ex-wife Rhona Gemmell and his children Spencer and Alice.