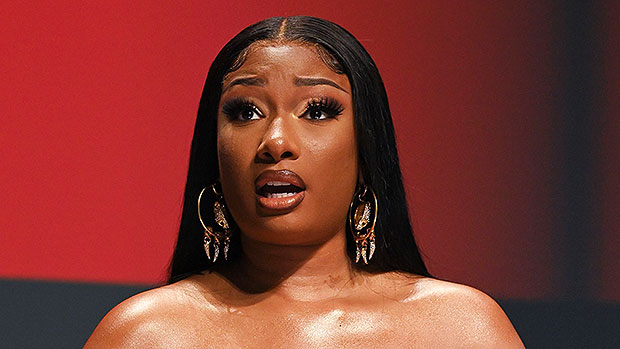 Megan Thee Stallion, 27, was the victim of a home invasion and burglary on Oct. 13, per TMZ. While the “Savage” singer is in New York City to host this weekend’s episode of Saturday Night Live, she took to Twitter to express gratitude that no one was harmed in the incident. “Material things can be replaced but I’m glad everyone is safe,” Megan wrote, along with a blue heart and prayer hands emojis. And just minutes before that tweet, she wrote, “Wow,” to her 7.6 million followers.

Following the difficult news, Meg then took her comments a step further by telling her fans that she needs to take some time off. “Hotties im really sorry but after SNL I really gotta take a break I’m so tired, physically and emotionally,” the hit-maker concluded. On Thursday night, while Megan was not home, the robbers allegedly took $300-$400K worth of jewelry and cash from the star’s property. TMZ also reported that the people who broke into Megan’s home had gone into the primary bedroom and smashed a glass door to trespass. HollywoodLife has reached out to Megan’s rep for comment about the burglary reports.

As mentioned above, she is set to host the hit comedy show this Saturday, but she will also be performing as the musical guest. On Oct. 13, Megan took to Instagram to share a behind-the-scenes look at her time on SNL. “Hotties y’all ready for #stallionnightlive @nbcsnl,” she wrote. This is not her first time performing on the show, as she took the stage back in 2020 to perform her hit song “Savage.”

Following the day of the burglary, the songstress also shared a promotional video for this week’s episode alongside cast member Heidi Gardner. In the adorable video, Megan teaches Heidi how to make her signature “ah” sound. “And let me tell you it’s gonna be a real ‘Hot Girl’ SNL,” the 39-year-old joked, to which Megan replied, “OK Heidi – ah!” The longtime comedian then tried to imitate the rapper’s sound to which Megan reassured her that it was right by saying, “yeah!”

The news of Megan performing and hosting the NBC show first came on Sept. 20, almost one month before her home was broken into. “Hosting andddd performingggg REAL HOT GIRL SHIT @nbcsnl tune in ALL HOTTIES,” the beauty wrote via Instagram. Saturday Night Live airs at 11:35 p.m. PST/EST and 9:30 p.m. MT on local NBC affiliates. The series can also be streamed live on the Peacock app.