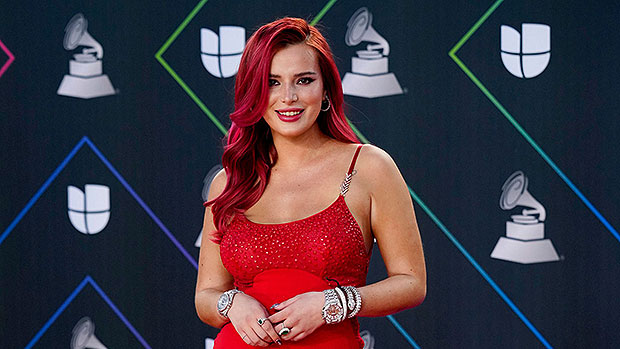 Bella Thorne has a new love in her life! She went Instagram official with producer Mark Emms on Oct. 11, 2022 after he celebrated her 25th birthday with her and her closest friends in the Dominican Republic. The Shake It Up alum introduced Mark to fans by sharing a sexy video of him kissing her chest in a carousel of clips from her trip. Mark being there certainly meant a lot to her, as she gushed that she “couldn’t have asked for a better birthday celebration” in her post.

Mark and Bella were originally spotted kissing during a vacation in Mykonos, Greece on Aug. 27, 2022, although his identity was not known at the time. Then, on Sept. 9, PEOPLE confirmed their budding romance. “It’s new, and they’re having fun,” a source close to the couple told the outlet. “They’ve been dating for about a month.”

So, who is the guy who has the key to Bella’s heart? Read on to learn all there is to know about Bella Thorne’s new boyfriend, Mark Emms.

Mark Emms Is A British Producer

Mark is from London, England, according to his LinkedIn page. He is an entrepreneur who founded his first company, Fire Global Media Productions, in 2008. He liquidated the creative agency in 2019 and founded his current production company, Eastern Road Films LLC, the same year. Mark has worked with some of the biggest companies throughout his career, such as Lionsgate, Netflix, Spotify, YouTube, 20th Century Fox, and many more. In addition to working with big brand names, Mark has collaborated with some of the hottest stars, according to his LinkedIn. “Mark has worked with the likes of Stevie Wonder, John Legend, Jamie Cullum, will.i.am, Ellie Goulding, Beck, Bryan Ferry, Paloma Faith, Tony Bennett and Dua Lipa,” the site reads.

He got his start in the entertainment industry in artist management and public relations, per his Creativepool page.

Mark Emms is the producer behind Netflix’s Bad Vegan: Fame. Fraud. Fugitives, a true crime story that recounts how Sarma Melngailis, a once-awarded vegan restaurateur behind the now-shuttered New York’s Pure Food & Wine, got involved with and married a conman named Shane Fox who took all of her restaurant’s funds under the promise that he would make her foodie dreams come true and make her beloved pitbull immortal. Sarma got hit with reality after getting caught while on the run after having stolen $2 million with Mark.

Ryan Eggold: 5 Things To Know About Actor, 37, Spotted With Bella Thorne, 24, In Montauk

“I couldn’t believe what I was hearing. It was the most bizarre and surreal story I’d ever heard and I had to try and make sense of it,” Mark recalled to Yahoo! entertainment about his first impressions of the celebrity chef’s story. “How and why did this nightmare happen to someone like Sarma? It was also a story that I found deeply shocking and cruel and it felt important that it be told to a wider audience.”

Mark Emms Has No Shame In Showing His Love For Bella

As seen in the last slide of the above carousel, Mark had no problem showing some sexy PDA with his woman as she celebrated her 25th birthday. Considering this is only the beginning of their relationship, there will certainly be more loved-up action to come as long as their romance stays strong!