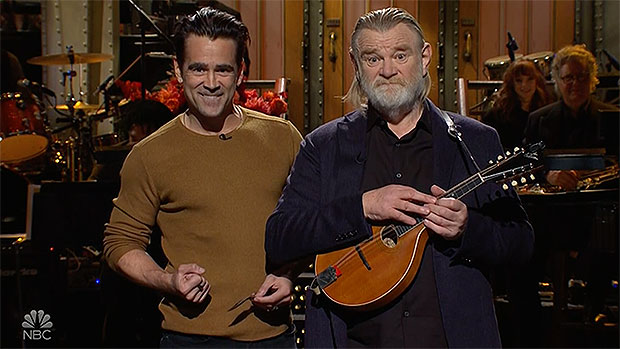 Brendan Gleeson had his pal Colin Farrell crash his opening monologue on SNL! The actor, 46, co-stars with Brendan in The Banshees Of Inisherin — and was a delight for the audience in Studio 8H! “You know who else is weird and wonderful? Colin Farrell,” Brendan began before Colin came out. “It’s about two fellows who fall out. I love Colin to bits but the story isn’t too far from the truth,” he added before the actor made his surprising appearance with a fake mustache and all (which he ripped off).

“I wanted to ask you a question…a normal . Who’s your favorite co-star you’ve ever worked with? Paddington Bear? Who’s your favorite human co-star who’s 46 and his name begins with C?” Colin then prodded as Brendan didn’t give him the time of the day. “Cillian Murphy,” Brendan quipped, before inviting Colin to sing a song together.

Brendan is, of course, is best known to the Harry Potter universe as the one and only Alastor Moody — the Defense Against the Dark Arts professor with an external magical eye. The actor, 67, made his Saturday Night Live debut on Saturday, Oct. 8, and made a hilarious reference to the character who appeared in all eight films. “I’m that fella you think you saw me in that thing that you can’t remember that you think you kinda liked,” he said to the audience. “You’ve possibly seen me on Harry Potter,” he also joked, referencing his most famous role.

Alastar Moody is known in the Wizarding World as a “pure blood wizard” — meaning both parents are also of magical blood. In the fictional series, he is both an Auror and member of the Order of Phoenix.

Brendan has previously opened up about the impact appearing in the Harry Potter films has played in his life — admitting that he’s not recognized as much due to the unique look of his character. “As unconventional as my looks are, they’re not quite as unconventional as Mad-Eye Moody’s, so I’ve kind of gotten away with murder,” he joked in an interview with The Guardian in 2011.

“Robbie Coltrane [who plays Hagrid] told me I should forget about walking through airports again, but to be honest it’s a bad idea to tell your 10-year-old to talk to me, because the poor child makes no connection with Mad-Eye Moody and he’s looking at me saying: ‘Why am I being asked to talk to a stranger?’” he quipped, shouting out his close pal Robbie.

Michael Longfellow: 5 Things To Know About One Of ‘SNL’s Newest Cast Members