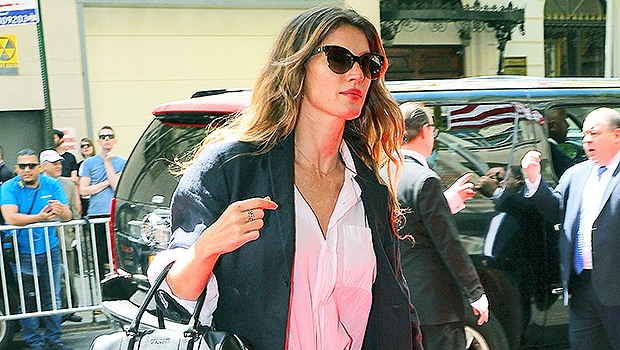 Gisele Bundchen was seen out and about in Miami on Thursday, October 6, as one of the country’s most powerful marriages seemingly continued to unravel. The supermodel, 42, stepped out wearing a breezy, oversized white top, a pair of fitted jeans, flip flops, and for the second time in two days, no wedding ring. In photos, which you can SEE HERE, the embattled wife of Tom Brady carried a leather-encased laptop and a water bottle as she made her way from a building to a vehicle. The stunning former Victoria’s Secret Angel wore her famous wavy tresses long, keeping her makeup minimal and carrying a casual denim quilted handbag.

Though she conspicuously did not wear a wedding band, she did rock a large green stone on one finger, and wore a bracelet, gold necklace, and small hoop earrings. She finished the look with a sleek pair of sunnies. Gisele’s solo outing follows a sighting on Wednesday, October 5 with her children with the NFL great, Benjamin, 12, Vivian, 9. She was reportedly taking them to a gym in the Miami area.

And all of this comes as rumors surrounding the couple escalate, culminating in a report that the power couple had both hired divorce attorneys and are headed for a formal split. Per sources for Page Six, they are “looking at what a split will entail, who gets what and what the finances will be.” The October 4 report also claimed that the feuding couple, who have been married since 2009, would share joint custody in the event of a divorce. They’ve reportedly been living separately for months.

“I never actually thought this argument would be the end of them, but it looks like it is,” one of the sources familiar with the situation told the outlet. “I don’t think there will be any coming back now. They both have lawyers and are looking at what a split will entail, who gets what and what the finances will be.”

Tom and Gisele’s marriage reportedly came to a head after Tom reneged on his decision to retire from the NFL earlier this year. He’s currently playing for the Buccaneers again, and Gisele has been conspicuously absent from his games. “Gisele did her best to adjust to Tom‘s decision to go back [to the NFL] but it hasn’t been easy for her because that wasn’t their agreement,” an insider told HollywoodLife EXCLUSIVELY in September as the drama unfolded. “She’s a very supportive wife, but she’s also speaks her truth so there’s been a lot of tension since he went back. She needed to take some time to herself and Tom is respecting that.”