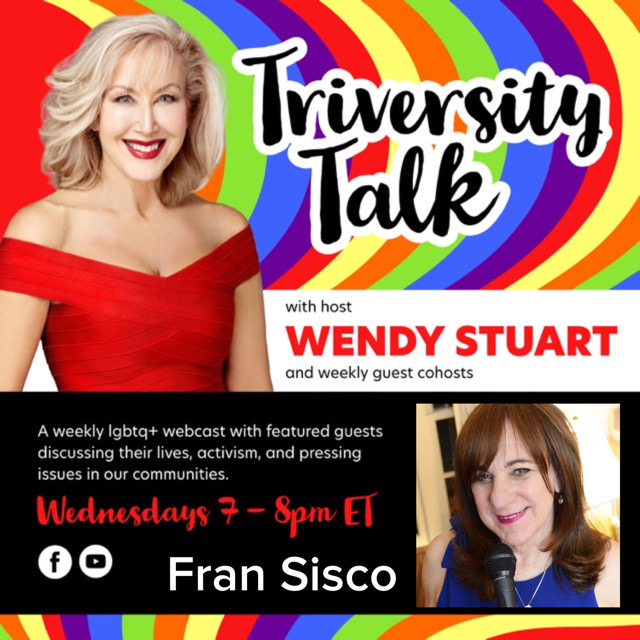 Wendy Stuart and Steven Bloomer Teague will be hosting TriVersity Talk! This Wednesday at 7 PM ET  in a replay with featured guest Fran Sisco. This episode is a part of The Best Of TriVersity Talk series that takes place on the first Wednesday of each month.

TriVersity Talk! is a weekly web series with featured guests discussing their lives, activism and pressing issues in the LGBTQ Community. With TriVersity Talk!, the goal is to laugh and learn. TriVersity Talk! Is part of TriVersity’s ICARE Initiative. ICARE stands for Increasing Community Awareness through Relevant Education. ICARE Programs are generously funded by The Greater Pike Community Foundation.

FRAN SISCO is a very prolific entertainer and creative person spanning many varied fields in the NYC region. Launched like a rocket on 1/1/11 when she transitioned to being a full-time transgender female, Fran has been non-stop and (a) performed in over 200 shows, including cabarets, singing, comedy, variety and sketches (b) acted in plays, films and webseries (c) wrote, directed and produced 2 award-winning documentaries and 3 award-winning music videos of songs she created (d) wrote, directed and produced 3 short plays (e) participated in scores of art shows and exhibits for her paintings and award-winning sculptures (steel and wood). (f) curated, moderated and produced virtual shows on the subjects of kindness, fairness, race, diversity, equity and inclusion (g) founded and co-hosted the 12-year running Crisis Help Radio Show on WVOX 1460AM and http://www.wvox.com, (h) guest and advocate on shows, including cable and internet about gender, sexuality and race (i) frequent speaker and entertainer for non-profits and (j) authored over 100 essays, 200 poems and 100 songs. Fran claims that her expansive and diverse creative accomplishments are in part due to her life’s mix of 2 genders and her many years interacting her strong left-brain (40 years as a CPA and business expert) and her right-brain (insatiable curiosity, creativity, spirituality and love of people).

Subscribe and listen to TriVersity Talk! On Apple Podcasts/iTunes here:

“Just Like You” by Chris McCooey
Elektragaaz Releases “The Synaesthetic Picture Show: Part 6”
Dianña Returns With New Christmas Single
Change is Everything with Some Days Are Darker
Exclusive Interviw with Avery Roberson