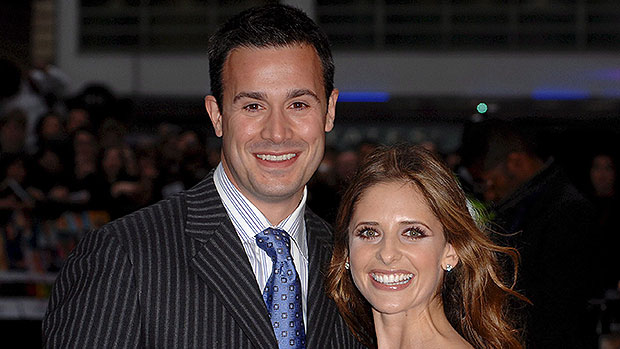 Sarah Michelle Gellar, 45, and her husband, Freddie Prinze Jr., 46, share two kids together: Charlotte Grace Prinze, 13, and Rocky James Prinze, 10. The family of four will also remain just that, as the All My Children star confirmed to US Weekly that she and Freddie do not plan on expanding their family. When Sarah gave Charlotte and Rocky two puppies she told the outlet, “They just got their two siblings, they’re good.”

The gorgeous actress is most known for her role as Buffy in the hit series Buffy The Vampire Slayer from the late 1990s. She also starred in the 1999 cult classic Cruel Intentions alongside Reese Witherspoon. The mom-of-two and She’s All That star welcomed their eldest child, Charlotte, when Sarah was 32 years old, seven years after they wed in 2002. Keep reading to learn more about Sarah and Freddie’s family!

Sarah and Freddie met on the set of the 1997 horror movie I Know What You Did Last Summer. It was only a matter of time until they fell head over heels for each other and got married in 2002. But despite meeting in 1997, the celebrity couple did not begin officially dating until 2000, according to Today. By 2001 they were engaged and a year later they celebrated with a wedding in Mexico. In January 2020, Sarah revealed via Instagram how she and Freddie began their fairytale romance . Apparently, their friend, Leslie, was supposed to meet them for dinner but she missed her flight. That led to Sarah and Freddie meeting up anyway, and the rest is Hollywood history!

Sarah Michelle Gellar and Freddie Prinze Jr., On Their Kids

Although the power couple keep their children out of the public eye, over the years they have talked openly about their adorable kiddos. In Sept. 2022, Sarah and her family adopted a rescue puppy named Franz, and she told PEOPLE how parenting the dogs versus the kids differs. “My kids always say that I’m stricter with my children than my dogs,” she said. “When my children mess up, I’m the first one to punish you, but the dogs, you sometimes have to remind me to punish them.” Freddie also revealed that the Prinze household is a strict one in a 2021 interview with US Weekly. “We are strict as hell,” he said. “Look, I don’t believe in whooping kids. I’ve never whooped mine. My mom whooped me. They were, like, preventative whooping, so I know how to be strict.” He also revealed that he and Sarah have set “100 rules” for both Charlotte and Rocky.

Charlotte was born to Sarah and Freddie on Sept. 19, 2009. Her birth was monumental, as it was Freddie and Sarah’s first child together. Charlotte is also their only daughter! The mini-me does not appear too often on her mom’s social media, but Sarah does share the occasional throwback photo with her adorable daughter for special occasions. On Sept. 19, 2021, the loving momma took to Instagram to wish Charlotte a happy birthday. She captioned the photo, “They say a daughter is a little girl that grows up to be your best friend. It’s my best friends 12 bday today!! On this day 12 years ago my greatest life truly began.”

Despite being a famous actress herself, Sarah told PEOPLE that she is not pushing her kids into acting. “It’s different because I wasn’t the child of someone that was in the public eye, and so unfortunately I think the rules are different,” she said in Dec. 2020. “I think there’s a very different pressure for ‘the children of’ … They can decide what they want to do for themselves. I’ll never push them. But, in the meantime, they have to stick to schooling. My kids have too much stage fright anyway.”

William Shatner’s Kids: Everything To Know About His 3 Children & Their Mom

Just three years after Charlotte was born, Rocky came into the picture. The family’s only son was born on Sept. 20, 2012, at 4:13 PM. Although not much is known about Rocky, the loving parents sometimes share photos of him along with his big sister on social media. For Mother’s Day in 2021, Sarah shared a sweet black and white throwback photo of Charlotte kissing her baby brother on the head. She captioned the post, “To the two that made me a mother, and will forever call me mommy. On this my first Mother’s Day not with you, there is a part of my heart in pain, but the larger part is overflowing with love and gratitude. I am a better person for knowing and loving you. Luckily for me everyday with you is Mother’s Day.”

As we have mentioned, the Prinze family remains pretty private about the lives of their children. However, Freddie and Sarah still love to share photos from their family vacations online! The famous family went to Hawaii in January 2022 and shared a series of photos from the holiday on Instagram. Sarah captioned the post, “Vacation photo dump (also know as me sitting at home trying not to get covid and looking longingly through pictures).”

On Sept. 19, 2022, Sarah took to her Instagram to celebrate both of her kids birthdays. She wrote, “@realfreddieprinze and I made two incredible kids. But they came into the world three years and one day apart. Today our daughter becomes a teenager and tomorrow our son hits double digits. It’s always madness these few days- so I’m going offline to enjoy (who am I kidding- to manage it all) and I’ll recap later in the week.”