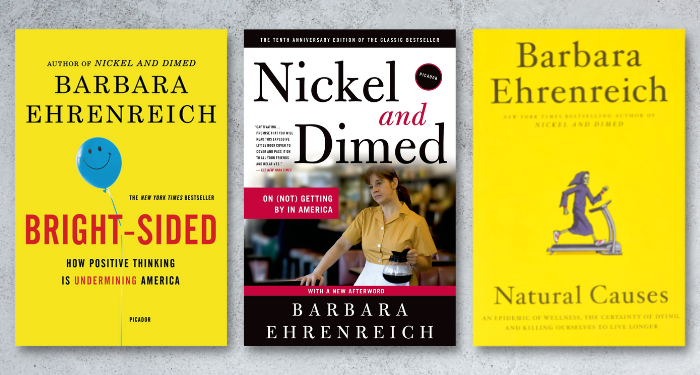 Barbara Ehrenreich was an author, journalist, and activist who published more than 20 books, including Nickel and Dimed, which documents several months she spent working the lowest-paying jobs in the U.S.A. and trying to survive on that income. She wrote articles and book reviews for a wide variety of publications, including The New York Times, The Washington Post, Mother Jones, Vogue, TV Guide, The Wall Street Journal, and many more.

Ehrenreich passed away September 1st at a hospice in Alexandria, Virginia. Her daughter, Rosa Brooks, has stated it was the result of a stroke. Rosa also shared that Barbara was still working on a book in her final days, about the evolution of narcissism.

In 2018, Ehrenreich published a book called Natural Causes: An Epidemic of Wellness, The Certainty of Dying, and Our Illusion of Control. In an interview with Jezebel about it, she said:

“I face my personal death with equanimity in no small part because I have been a participant in the feminist movement and whatever else we social justice warriors do. I know that I am part of a very long tradition of people who have fought for the same things over the centuries.”

She goes on to explain that her work from then on was about passing the torch to the next people to take up this fight.

You can read more about Barbara’s Ehrenreich’s life and death at the New York Times.

Find more news and stories of interest from the book world in Breaking in Books.

Also In This Story Stream