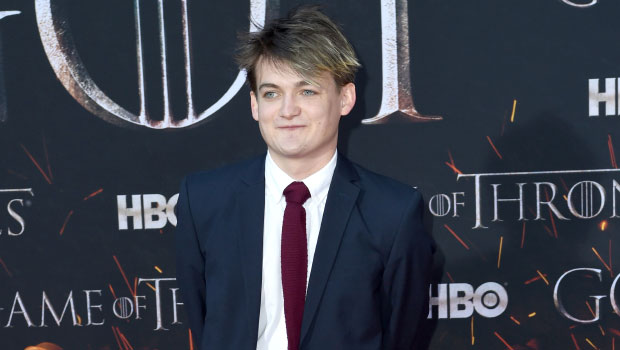 King Joffrey has certainly made some dramatic changes! Game of Thrones alum Jack Gleeson, 30, looked fully unrecognizable as he appeared to marry girlfriend Roisin O’Mahoney in County Kerry, Ireland recently. In photos shared to social media, the HBO star wore a casual green button-down shirt and brown pants and altered his pompous GOT appearance by rocking a mustache and lengthened hair.

His beautiful bride Roisin wore a lovely pastel patterned gown and carried what appeared to be a bunch of pink hydrangeas. Inside the church, the happy couple appeared to be surrounded by their closest friends and family for an intimate ceremony.

Parish priest Father Patsy Lynch tweeted out the news on Monday, August 29. “Very simple, prayerful and dignified marriage ceremony for Film Celebrity Jason [Jack] Gleeson and Roisin: The Glen Church,” he captioned the sweet photos. Fans and well-wishers gathered in the comments section to gush over the low-key event.

“That’s how weddings should be not these expensive lavish affairs that leave couples borrowing thousands of Euros to pay for,” one follower commented about the simple ceremony. “A wedding is not putting on a show on for your parish it’s about 2 families coming together to make a bigger family it’s love not an instastory [sic].” Another gushed over how happy the newlyweds looked. “Such a lovely wedding by the photos,” they wrote alongside a row of heart emojis. “They look so happy and in love.”

“Thanks for sharing a little bit with us,” a third remarked. “I totally admire them and wish them a long and very happy life together.” But Fr Lynch told The Irish Independent that the apparent nuptials were actually just “a pre-wedding ceremony” and added that “the real ceremony will take place over in England, but the family have been holidaying down here in Ballinskelligs, The Glen, for many years and they have so many happy memories here.”

That would certainly be in keeping with the growing celebrity trend of marrying in a simple ceremony, then holding a much larger celebration. Most recently Jennifer Lopez and Ben Affleck married in Las Vegas before holding a lavish ceremony in Georgia. Prior to that Kourtney Kardashian and Travis Barker married in a Santa Barbara courthouse before holding a star-studded bash in Portofino, Italy.