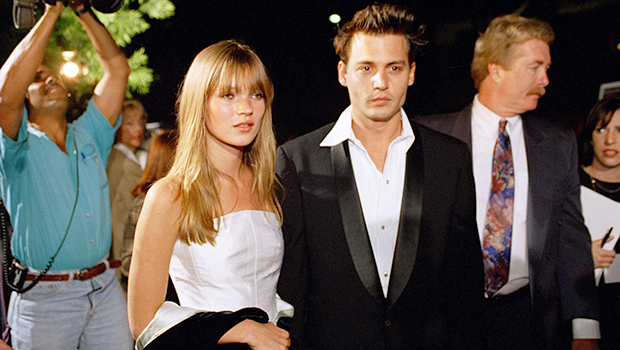 Diamonds are a girl’s best friend… even if they are gifted in the most unusual way! Kate Moss recalled receiving her “first diamonds ever” in the form of a necklace from former boyfriend Johnny Depp, who hid the jewels in his “bum” before presenting them to her during a dinner date! While anecdote has circulated over the years, the 48-year-old supermodel spilled all the tea in a new video interview for British Vogue.

“And that diamond necklace Johnny gave me, they were the first diamonds I ever owned,” Kate explained while looking at a throwback photograph of herself in her 20s wearing the bling. “He pulled them out of the crack of his arse. We were going out to dinner and he said, ‘I’ve got something in my bum, can you have a look,’ and I was like, ‘what’ and I put my hand down his trousers and I pulled out a diamond necklace. That diamond necklace.”

It appears the NSFW diamond presentation was a bit of a fond memory for Kate, much like her three-year romantic relationship with the actor, as she gushed about it in 2012, 15 years after they split. “There’s nobody that’s ever really been able to take care of me. Johnny did for a bit. I believed what he said,” she said, via USA Today. “Like if I said, ‘What do I do?,’ he’d tell me. And that’s what I missed when I left. I really lost that gauge of somebody I could trust. Nightmare. Years and years of crying. Oh, the tears!”

Kate even ended up testifying on Johnny’s behalf in his defamation lawsuit battle with ex Amber Heard. After Amber brought up a rumor in court that Johnny had pushed Kate down a set of stairs, the British beauty virtually took the stand to claim, “[Johnny} never pushed me, kicked me or threw me down any stairs.”

Johnny sued Amber for $50 million after she published a 2018 op-ed in The Washington Post, which he said defamed him. She countersued for $100 million, citing defamation, as well. Johnny was awarded $10 million in compensatory damages and $5 million in punitive damages. Although she was found guilty, Amber was awarded $2 million for her counterclaim, which held Johnny’s lawyer responsible for defamation in calling Amber a liar.

The Best Cross-Body Bags You Can Buy In 2022
Kodak Black Saves 28 South Florida Families From Eviction
Victoria Beckham Appears to Have Removed David Beckham Initials Tattoo
Khloe Kardashian Reveals Tristan Proposed Before Paternity Scandal: Why She Said No
TikTok Star Dylan Mulvaney’s Tiffany Necklace Is a Gift to Her Younger Self