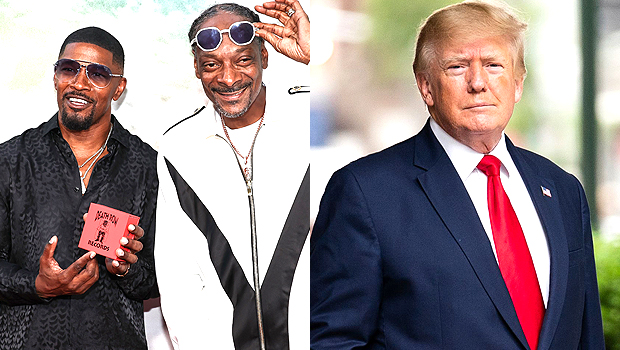 Jamie Foxx, 54, had all the jokes on the latest episode of the Rap Radar podcast, as he did a perfect impression of Donald Trump, 76! The actor killed the room when he nailed Trump’s voice and even made Snoop Dogg, 50, laugh during the hilarious interview on August 25. And his impression was so accurate that podcast hosts Elliott Wilson and Brian ‘B.Dot’ Miller were also dying from laughter!

The Day Shift actor did some of Donald’s most famous hand gestures and facial expressions while also adding some of his own exaggerated commentaries. “I love Snoop D O Double G, great person,” Jamie joked before adding, “I love Death Row Records” — a reference to the iconic rap record label Snoop purchased back in February.

On the podcast, Jamie also mimicked Trump’s voice to deliver one of his most famous lines: “Excuse me, fake news!” He also joked, “They tried to give me the virus!”, which seemed to be a reference to when Trump had COVID-19 in October 2020. Following that comment, Jamie went on to ask “Who is ‘they’?”, before laughing at himself.

Jamie’s impression was so spot on that many people commented on Elliott’s tweet with the clip to say how talented the actor is. One user wrote, “This the best Trump impression I’ve ever heard tho, Jamie is talented.” And we couldn’t agree more! Another user chimed in and said, “It’s unbelievable. It’s the best impression of Trump EVER… and he does it so effortlessly. What a talented man he is.”

Jamie is certainly talented, but we must not forget that he is not the first person to do a spot-on impression of the former US president. Many comedians have done a pretty good job at it in the past. In fact, one of the most iconic Trump impressions from the past several years was done by Alec Baldwin in various Saturday Night Live skits. Still, Jamie’s own impression will now go down as one of the most memorable.