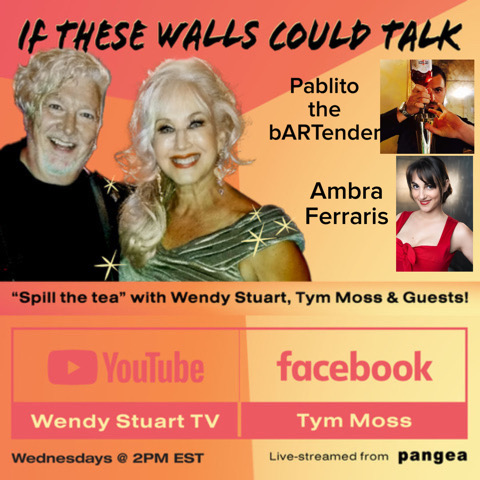 Who else but hosts Wendy Stuart and Tym Moss could “spill the tea”  on their weekly show “If These Walls Could Talk” live from Pangea Restaurant on the Lower Eastside of NYC, with their unique style of honest, and emotional interviews, sharing the fascinating backstory of celebrities, entertainers, recording artists, writers and artists and bringing their audience along for a fantastic  ride.

Ambra Ferraris and Paolo Beatino (AKA Pablito the bARTender) will be featured guests on “If These Walls Could Talk” with hosts Wendy Stuart and Tym Moss on Wednesday, August 17th, 2022 at 2 PM ET live from the infamous Pangea Restaurant.

International film actress, Ambra Ferraris, is now part of the entertainment industry in California. She created the roles of Gloria Allred/Connie Gonzalez in the controversial “Roe” by Lisa Loomer at the Los Angeles Performing Arts Conservatory. Her film credits include The Sweepers; Ashley Jones is perfectly normal, Come Back, Gauge, and many others. A retrospect of her film work appeared in InDfilm (https://indfilms.studio/2022/06/30/special-retrospect-the-films-of-ambra-ferraris/)

Paolo Beatino, aka, Pablito the bARTender, was born in Alba (Italy), hometown of the famous white truffle and the most renowned Italian wines. That’s maybe where he got his passion for strong and old red wines. He started to move his first steps in the world of bartending pretty late, at 24 years old, to pay for his studies, but he discovered very very soon what does it feel to stand behind a bar and it was love at first sight. Even when he graduated from law school he preferred to leave the codes and the books of rules but not his jiggers and his shakers, he groomed his mustache and specialized in mixology. From 11 years he is head bartender and manager in Gfparty, a big company in Turin that is leader in the cocktail catering business. One of his best qualities is the capacity to convey his passion for the products and for his job and he loves to do that with his students during his courses, masterclasses and experiences in Casa Martini, the headquarter of Martini & Rossi, the famous company of vermouth with whom Pablito collaborates from many years. Since January 2022 Paolo started a new collaboration as bar manager and head mixology for GAF Cambiano, a new fancy restaurant and cocktail bar just opened in Turin area by a previous finalist of masterchef Italia. Pablito also participated in some competition of mixology in Italy and won two of them with his creations, both in 2021, “best cocktail for Garda Gin” and “online cocktail bartending competition” and in November 2019 he classified 4th in the final of the Italian competition called “italian tea mastercup cocktail competition”.

Watch Ambra Ferraris and Pablito the bARTender on “If These Walls Could Talk” with hosts Wendy Stuart and Tym Moss on YouTube here: