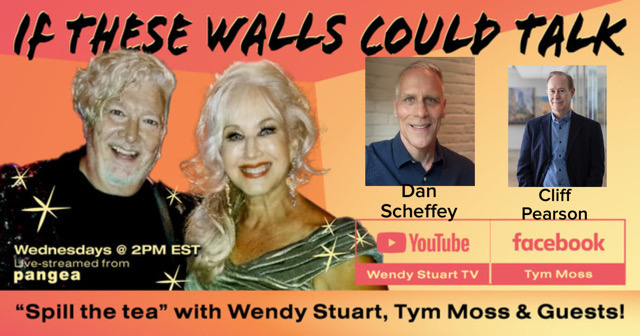 Dan Scheffey and Cliff Pearson will be featured guests on “If These Walls Could Talk” with hosts Wendy Stuart and Tym Moss on Wednesday, July 13th, 2022 at 2 PM ET live from the infamous Pangea Restaurant.

Dan Scheffey is an accomplished media and entertainment professional, with demonstrated expertise as a “story-teller” for independent clients and leading corporations, including publicity and communications strategy, innovative brand management, as well as digital and social media engagement.

Cliff Pearson is Joint Artistic Director of The Village Trip, joining the festival’s     founder Liz Thomson in that role. Pearson and Thomson work together to develop the festival’s program and establish relationships with community organizations. He has lived in Greenwich Village for more than 30 years and loves its crooked streets and quirky ways. He writes about architecture, urbanism, and culture for many publications, and serves as a contributing editor at Architectural Record, where he had been on staff for 26 years. From 2018 through 2020, he was the editorial director of Kohn Pedersen Fox, and from 2016 to 2018, he was the director of the University of Southern California’s American Academy in China and a lecturer at the USC School of Architecture. He serves as a director of Asia Design Forum, a nonprofit think tank that organizes events and generates dialogue among the design community and the general public. He is the co-author, with A. Eugene Kohn, of The World By Design: The Story of a Global Architecture Firm, published by Rosetta Books in 2019 and is the author of Indonesia: Design and Culture, published by the Monacelli Press in 1998. He edited Modern American Houses, published by Harry N. Abrams, Inc., in 1996 and reissued in 2005, and has written essays for numerous books on the built environment.

Watch Dan Scheffey and Cliff Pearson on “If These Walls Could Talk” with hosts Wendy Stuart and Tym Moss on YouTube here: