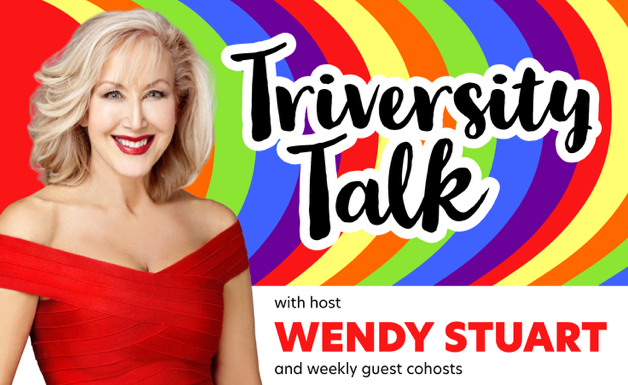 TriVersity Talk! is a weekly web series with featured guests discussing their lives, activism and pressing issues in the LGBTQ Community. With TriVersity Talk!, the goal is to laugh and learn.

Ike Avelli began his career in 2009 as a ‘last minute’ fill in at a Christmas Party doing Stand Up comedy. The sound of laughter sealed the deal, and he would continue to write/perform his own material. Some of his idols are Joan Rivers, Sandra Bernhard, Rodney Dangerfield, Whoopi Goldberg, Tracey Ullman and Chelsea Handler.

Since 2009, he has performed at many venues around the U.S.: Las Vegas, NV; NYC; Atlantic City, NJ; Windsor, CT; Philadelphia, PA; Hollywood, FL to name a few.

He is a supporter of the LGBT Community and has performed for LIFEbeat (lifebeat.org), The Imperial Court of NY (ICNY.org), and Gay Men’s Health Crisis (gmhc.org).

He has appeared on many talk/radio shows. Ike also co-hosted on the #1 Show on Wildfire Radio “The Idiots” from 2017 to 2018 and has appeared in the LGBT publications of GET OUT (Cover Story) and NEXT Magazine. In 2021 Ike and Tym Moss host a podcast called “Loose Lips” and has caught a buzz in the U.S. and internationally.

“50 Shades of Gay was a hit in NYC during PRIDE and SOLD-OUT Bally’s in Atlantic City in 2019. It was also part of the 2017-2019 Rochester Fringe Festival and SOLD OUT all four nights. The Huffington Post called it “the performance of the summer”, while hailing Ike Avelli as the “mastermind of creativity”.

Ike wrote his first book entitled, ‘A Year In The Life Of Ike Avelli…And It Ain’t Pretty”, a diary of the year 2017 and was listed in the Top 20 new releases on Amazon.com.

He was nominated for the 2013/2015 Glam Award for Best Comedy Performer.

Winner of the Get Out Magazine LGBT 2014 Comedian of the Year.

Winner of the 2018 Providence Fringe Award for 50 Shades of Gay.

Brooklyn native singer-songwriter Aris explores love, loss, heartbreak and healing on his new album “Through The Storms” . Both broad in style and still interconnected with the mix of its deeply personal solo work and collection of collaborations, the music is lush, emotional, intimate, tender, and soaring.

With his hands across all facets of songwriting & production, Aris takes the listener deeply into his world – revealing, refreshingly vulnerable, heartfelt and uplifting.  Aris delivers a collection of powerful rock anthems & equally memorable ballads on “Through The Storms”. There is a universal message that can be found through every sonic thread.  The tracks flow seamlessly through related genres – rock, soul, and country. The journey from New York to Nashville reflects in the collaborations with Aaron Lee Tasjan (on “Forsaken”) and Jeneen Terrana (on “Freedom”). Both Tasjan and Terrana began their musical journeys in New York City and found their wings in Nashville. “Forsaken” is part of the album’s final arch, inspired by the stages of grief.

The collection reaches its emotional core with “Forever and a Day” featuring trailblazing LGBT recording artist & activist Ari Gold, who passed away in early 2021 during the recording of the album. Themes of grieving & healing play out delicately, pulling at every heartstring on both the aforementioned track as well as on  “Missing” featuring Vincent DiGeronimo . Aris and Vincent wrote the song about their parent who both passed in the years prior. With the emotions palpable in every line in these songs, there is both a rawness and honesty that disarm and inspire the listener to process their own griefs and take steps toward their healing. The album ends with a reprise of “Love”, Aris’ 2019 collaboration with Grammy award winner Paula Cole. The stripped down instrumentation closes the album on a hopeful note, completing a journey through songs about love, loss, healing and finding the light again.

The album’s themes are further explored in the podcast & video series also named “Through The Storms”, which finds Aris chatting with collaborators and friends about personal stories regarding all the aforementioned themes. The series provides perhaps the most vulnerable notes from the album with uplifting stories that dive deep into emotional empowerment.

Aris and his music have been featured in fashion campaigns for Project Runway winner Irina Shabayeva and on dance floors at venues such as the Webster Hall, the Bitter End and Santos Party House. Jim Fusilli of The Wall Street Journal describes Aris’ music as “rock with big lyrical themes” and offers comparisons to singer Peter Gabriel. While Aris has also drawn comparisons to Kurt Cobain, Chris Cornell and U2, his sound is definitely unique. “Clubland’s newest rocker combines a punk sensibility with electronic dance to create a unique grunge house sound all his own,” writes Nashville’s “Inside OUT”.