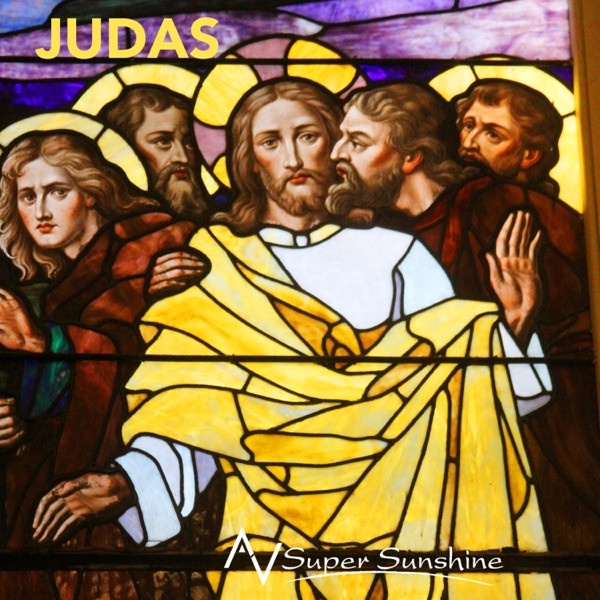 The fourth single from AV Super Sunshine’s album ARTROCK (Victor House Records) is out now – “Judas” is inspired by one of Jesus’ 12 Apostles. Tragic as the story is, AV Super Sunshine challenges and wins the listener’s approval with this sobering pop track. Even those words seem to be in opposition to this chilling song. While covering suicide in song is not new – AV Super Sunshine’s ode to Judas, the man who betrayed Christ, is certainly a unique take of biblical proportions. “Judas” follows other ARTROCK singles  “The Wedding Song”, “Together” and “Super Cool”.

Suicide can be a hot-button issue for some. “Judas” while not calling out the act of killing himself, infers Judas’ role in the capturing of Jesus to the high priests and eventual crucifixion by the Romans, with the lyric about the 30 silver coins. Like “Jeremy” from Pearl Jam, “Everybody Hurts” (R.E.M.), “Adam’s Song” (Blink 182) “Asleep” (The Smiths) and a slew of others, there’s a veil of sadness and despair. AV Super Sunshine counter balances the dreariness and loneliness of the vocals with electronic beats. I was expecting a drowning bass guitar or even brassier percussion – something to illustrate AV Super Sunshine’s namesake. What I heard all came down to the vocals. “Judas is my name, please curse me instead”, he sings. “So don’t get mad at Jesus,” he continues. The latter suggests we don’t take the Lord’s name in vain – rather, we say the name ‘Judas’ instead. The voice feels secretive. As if it were a prayer. I wondered if this was AV Super Sunshine’s way of projecting and encouraging us to change our ways and learn from the past.

I wrestled with drawing too much comparison to prayer or even religion in this review. I’m not sure why. I think sometimes music can be so boxing. AV Super Sunshine sings like it’s a poem. “Judas” called out to me as a human being about the need to recognize hurt and pain. It’s a real thing to feel these emotions. I think AV Super Sunshine is fully aware of the impact a song like this has. It’s quite the reaction. Unexpected. Some singers might find themselves envious of the way AV Super Sunshine projects (or measures) his voice in this song. I think he capitalizes on the tones and the seriousness of the subject.

I can’t quite put my finger on it, but this song also makes me feel tunnel-visioned. I found his voice is close-sounding. It’s as if I was enclosed in a bottle. You know there are things moving around you but all you can focus on is the thing right in front of you. His voice just felt like a magnet. I couldn’t pull away and I couldn’t stop seeing the image of a man so broken, so distraught after deceiving his close friend. I can’t imagine that pain. “Judas” is a bit cathartic in the sense that you need songs like this to slow you down, and really present to you the bigger picture of what is important in life.

The music of AV Super Sunshine has been heard all over the world in partnership with the radio plugging services offered by Musik and Film Radio Promotions Division.  Learn more https://musikandfilm.com