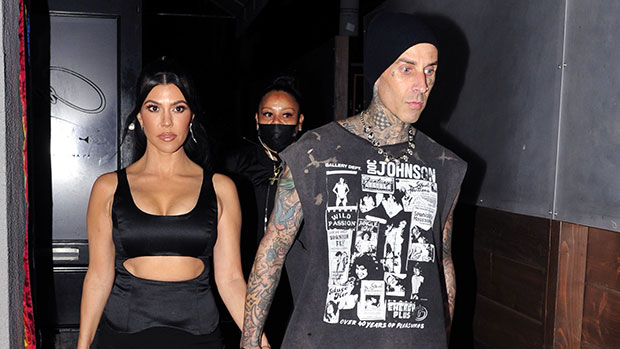 Kourtney Kardashian has been flaunting PDA with Travis Barker all over Italy for the last several days, and her exes, Scott Disick and Younes Bendjima, allegedly discussed the situation via Instagram DM.

Younes Bendjima is putting Scott Disick on blast! The model took to his Instagram Story to share an alleged Direct Message exchange between himself and Scott. The topic? Their mutual ex, Kourtney Kardashian, of course. According to the screenshot, WHICH YOU CAN SEE HERE, Scott sent Younes a photo of Kourtney and her boyfriend, Travis Barker, looking loved up while packing on the PDA in Italy. “Yo is this chick ok!????” Scott allegedly wrote. “Brooo like what is this. In the middle of Italy.” HollywoodLife has reached out to a rep for Scott for comment and to confirm the legitimacy of the messages.

In response to Scott’s alleged message, Younes wrote, “Doesn’t matter to me as long as she’s happy. PS I ain’t your bro.” He also called Scott out by adding, “Keep the same energy you had about me publicly, privately,” and posted a second slide that added, “Couldn’t miss this one. He’s been playing around for too long, tired (sic) to say quiet and be the nice guy.” Kourtney dated Younes for more than a year in 2017-2018, following her split from Scott (they briefly reconciled in 2019, as well). Ever since the breakup, Scott and the rest of the Kardashian family have not been shy when it comes to admitting that they didn’t think Younes was the right match for Kourtney.

Meanwhile, Kourtney has now been with Travis since the beginning of 2021, and they’ve been very public with their relationship. Scott is also in a new romance — he’s been with Amelia Hamlin since the end of 2020. However, before all of this, Scott was trying to reconcile with Kourtney, but she shut him down. Still, at the time, they were in a very good place when it came to co-parenting their three children. During the Keeping Up With the Kardashians reunion special, which aired in June, Scott even gave Kourtney and Travis his blessing.

“I think if you really love somebody, right? You want them to be happy no matter what,” Scott said at the time. “So I do give her a blessing to be happy.” Regarding Scott and Amelia, Kourtney added, “Yeah. Whoever would make him happy. Like, I would give my blessing.” Scott has not responded to Younes’ Instagram post at this time.

New Line Will Unleash Environmental Horrors With ‘Thaw’
RuPaul fought to get trans icon Ts Madison on Drag Race: ‘This is my show and I want her’
Prop gun use on movie sets: What, exactly, is the protocol?
“It Would Have Meant War”: The Inside Story of Axel Springer’s Cutthroat Deal to Buy Politico
Megan Thee Stallion Announces New Freestyle Compilation Something for Thee Hotties