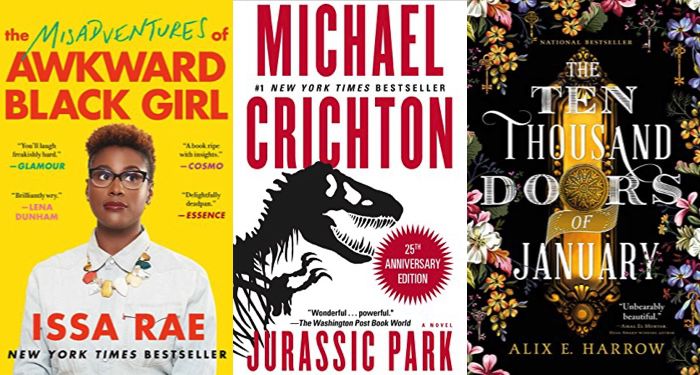 Hood Feminism by Mikki Kendall for $5.99

A Deadly Education by Naomi Novik for $1.99

The House of Silk: A Sherlock Holmes Novel by Anthony Horowitz for $3.99

The Ravens by Kass Morgan, Danielle Page for $2.99

Hollow Places by T. Kingfisher for $1.99

The Labyrinth of the Spirits by Carlos Ruiz Zafón for $1.99

The Priory of the Orange Tree by Samantha Shannon for $1.99

The Mermaid, the Witch, and the Sea by Maggie Tokuda-Hall for $2.99

Unfollow by Megan Phelps-Roper for $3.99

Texts from Jane Eyre by Mallory Ortberg for $2.99

Mycroft Holmes by Kareem Abdul-Jabbar and Anna Waterhouse for $2.99

The Lies of Locke Lamora by Scott Lynch for $3.99

Beowulf: A New Translation by Maria Dahavana Headley for $2.99

Gods of Jade and Shadow by Silvia Moreno-Garcia for $4.99

The Ascendant Trilogy: The Tiger’s Daughter, The Phoenix Empress, The Warrior Moon by K. Arsenault Rivera for $4.99

The Queens of Innis Lear by Tessa Gratton for $2.99

The Diplomat’s Daughter by Karin Tanabe for $1.99

Lobizona by Romina Garber for $2.99

When They Call You a Terrorist by Patrisse Cullors and asha bandele for $2.99

Lauren Zima: 5 Things To Know About Chris Harrison’s Fiancé
‘No Time To Die’ Becomes 2021’s No. 2 Hollywood Movie Worldwide As It Nears $500M Global
Gabrielle Union Covers Herself With Just Her Hair As She Twins With A Shirtless Dwyane Wade
Assistant Director on ‘Rust’ Who Gave Alec Baldwin Gun Had Safety Issues, Prior Crew Claims
E-40 Slinging Gourmet Meats as ‘Goon with the Spoon’