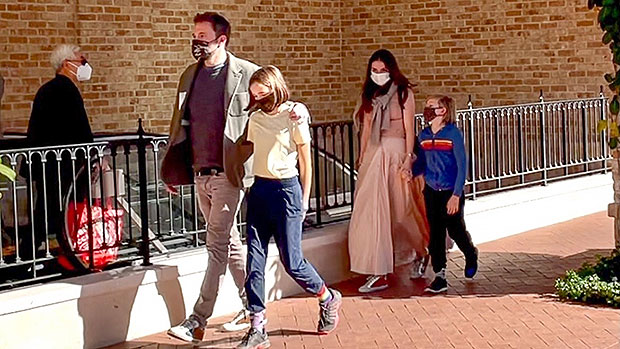 Ben Affleck and his girlfriend Ana de Armas were spotted taking a stroll and doing some shopping with two of his three kids, including daughter Seraphina and son Samuel, in Pacific Palisades, CA.

Ben Affleck, 48, reunited with two of his three kids, including Seraphina, 11, and Samuel, 8, on Nov. 28 when he returned to the Los Angeles area after filming the movie, Deep Water, in New Orleans, LA over the past few weeks. The doting dad was joined by his girlfriend and co-star Ana de Armas, 32, when he and the kids, who he shares with ex Jennifer Garner, 48, went on a shopping trip at Bonjour Fête at Palisades Village in Pacific Palisades, CA, and looked as happy as could be while walking in the area. They were also seen taking in some relaxation and fun at a park on the same day.

Ben looked handsome during the outing in a  gray blazer over a dark-colored shirt with pants and Ana looked casually stylish in a sleeveless top with a sweater tied around her shoulders and a long skirt. Seraphina looked comfortable in a white T-shirt and blue pants while Samuel wore a blue long-sleeved jacket that had multi-colored stripes across the front and black pants. All four of them also wore protective face masks to keep themselves and others safe from the coronavirus.

At one point during the day, Ana was seen talking and spending time with Samuel while they visited the park and they looked to be getting on well with each other. “Ana was very social with the kids and they also took a family selfie together,” an eyewitness told ET about the outing. The eyewitness also said they appeared to buy birthday party supplies when they were shopping but it’s unclear who they were for.

This isn’t the first time Ana, who met Ben on the set of Deep Water earlier this year, has spent time with him and his brood. The lovebirds started dating around March and it wasn’t long before the actress was seen fitting in nicely with him and his kids, including his oldest daughter, Violet, 14. Her first public outing with them took place in May when they all enjoyed a nice stroll in the Brentwood area with Jennifer’s family dog, Birdie, and Ben’s German Shepherd, Hutch.

Ben’s relationship with Ana has seemed to be going really well and the fact that she gets along with his three kids is surely making things even better.  “[Ben] met [Ana] at the right time in his life. He likes that she’s fun, beautiful and easy to get along with,” a previous source EXCLUSIVELY told HollywoodLife about Ben’s feelings for the brunette beauty. Whether or not they plan on taking their romance to the next level, such as an engagement and/or marriage, in the near future, remains to be seen. “There’s no pressure which is nice,” the source said.