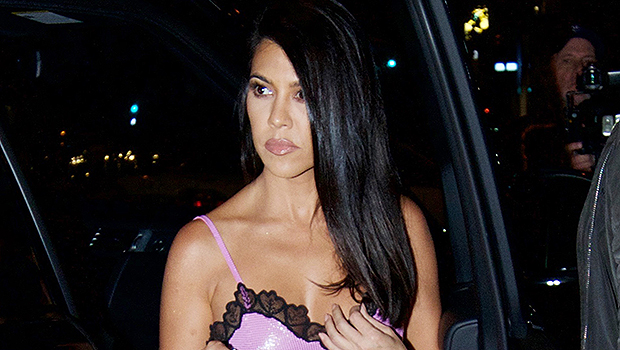 Even though Season 2 of The Kardashians only just premiered on Sept. 22, Kourtney Kardashian, 43, is already filming the next season! The reality TV star and Lemme founder shared some behind-the-scenes photos while filming the show via Instagram on Oct. 13. Kourt looked to die for in a tight blush-pink dress that featured her husband, Travis Barker‘s socks and boxers. “Rolling into season 3 of The Kardashians in husband’s boxers and socks with my dress…(did you see today’s episode from season 2 though?!)”, she captioned the post.

Kourtney’s carousel of content also featured a hilarious video of the mom-of-three climbing over a couch and falling. “That’s how you pull up to an interview!”, she exclaimed, to which a woman off-camera replied, “Kourtney makes an entrance!” Her sexy outfit also featured a backless cut-out that showed off some of Kourtney’s cupping therapy marks. In addition, the back of the dress was embellished with a silver chain that consisted of numerous hearts.

The newly-married star kicked her feet up in one of the photos to show off her man’s socks, and also showed off a portion of the 46-year-old’s boxers. Although Kourt was highlighting some of her husband’s accessories, he was not pictured in any of the photos. While the most recent episode of the show dropped on Hulu on Oct. 13, many of her fans were shocked to see that they are already making headway on Season 3. “Omg season 3 filming already?!”, one follower wrote in the comments.

Her Season 3 sneak-peak photos come just a few days after Kourtney and Travis posed with their blended family for his son’s, Landon, 19th birthday party. “Happy happy birthday @landonasherbarker I love you forever and always!”, she captioned the Oct. 9 post. In her adorable family photos, Landon playfully held Kourtney’s daughter, Penelope Disick, 10, in his arms while she smiled for the camera.

When Kourtney is not filming her family’s hit reality TV show or spending time with her family, she is busy promoting her new vitamin brand, Lemme. On Oct. 12 she took to Instagram to reveal that her Lemme Matcha flavor of gummies has been sold out. “You guys really love matcha just as much as I do!! We just sold out of @lemme Matcha (and that was a lot of matcha gummies) but are working to re-stock,” she wrote.

The businesswoman married the Blink-182 drummer on May 15, and had multiple weddings to celebrate her first marriage. Kourtney previously dated Scott Disick, 39, from 2006 until their final split in 2015. Together they share three kids: Mason, 12, Reign, 7, and Penelope.

Fai Khadra: 5 Things To Know About The KarJenner Family Friend On ‘The Kardashians’

Change is Everything with Some Days Are Darker
Elektragaaz Releases “The Synaesthetic Picture Show: Part 6”
Exclusive Interviw with Avery Roberson
“Just Like You” by Chris McCooey
Exclusive Interview With Danny Hughes (DCPA)