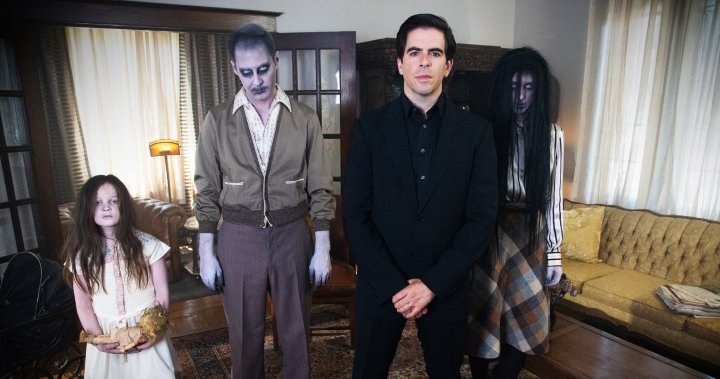 If you missed the first season of Eli Roth Presents: A Ghost Ruined My Life, take heart — the renowned horror director is back for a second season of his paranormal show, and apparently this time around it’s even more terrifying.

Featuring the supernatural experiences of everyday people, A Ghost Ruined My Life showcases footage and story recreation of various unexplained occurrences, from hauntings to mysteries to the just plain weird. Roth and his team solicit stories from the public and specifically seek out those of skeptics and non-believers, whose brushes with the supernatural are often so traumatic they convert into believers.

Global News spoke with executive producer Roth about Season 2, their story selection process and how he manages to keep the show scary.

Global News: A second season! Are you thrilled to be back with this series?
Eli Roth: Absolutely. I feel so lucky they took a chance on us with Season 1, and we really got to improve and see what worked and what didn’t and build on what made the show absolutely terrifying.

What’s different about this season, if anything?
Season 2 is much, much scarier. Season 1 we put out the call for anyone who had been stalked by a ghost or paranormal entity, and we got about 20 submissions that were real stories. With the benefit of people watching the first season, we got over 300, so we really were able to choose eight terrifying stories to tell. People really opened up to us, it’s incredible.

Do you still feature the stories of a wide swath of people from different age groups and walks of life?
We try to. We don’t want to see the same thing happen to the same type of people. One of the challenges is not repeating yourself, but every haunting is different. I generally look for great stories that happened to people you absolutely would never believe a paranormal experience would happen to. Skeptics, non-believers, they’re the best because they speak to a large part of the audience that want to believe in ghosts, but stop short of fully believing.

Gone ghost hunting — Meet some Canadians who seek out the ‘dead’

I understand something creepy happened during filming. The camera just shut off mid-interview? Can you tell me more about that?
That happens sometimes but there’s usually an explanation for it. In this case, there was none. The camera is working fine, we go to the haunted location, the subject warns us that they’ll know we’re talking about them, and either the lights flicker or the camera just breaks. It’s crazy, but we just accept it as part of making the show.

So the stories are that scary? Planning on turning any of these into a horror movie?
Very. When you see the paranormal attack this one couple caught on camera it is jaw-dropping. They have never shared the footage before, and it’s harrowing. I’d love to turn some of the stories into horror movies, but right now the focus is on telling their stories as honestly as possible. We don’t judge, we edit where we need to legally protect someone’s identity, but we just let them tell us what happened and we shoot horror movie scenes of the most terrifying parts.


Have any really stuck with you as you go on with your life? Why?
That attack on the couch really stuck with me. We’ve all napped on the couch but not many of us have had our leg pulled over our heads when we were on our stomach. The footage is terrifying, it’s not a pose you could recreate even if you were a master yogi.

A lot of shows in this vein use fake jump scares and other phoney techniques. Do you seek to avoid these things, and what do you do to present an authentic show?
I feel like you get one jump per story. Scares are involuntary, and jumps can be fun, but more than one it feels cheap and insecure, like you don’t have the goods and you’re overcompensating with a music sting. We try to find stories that are just plain disturbing and creepy. Things out of place, kids and dogs behaving oddly, all of that can be so much scarier than a jump.

The key is to tell the story as honestly as you can and the story itself is so scary you don’t have to force it.

‘Strange things out there’ — Inside Lake Ontario’s ‘Bermuda Triangle’

What’s up next for you? Sticking with the small screen or any plans to return to the big screen?
I’ll be on Pandora for a while longer making Borderlands, then I want to get back to spilling some blood on the big screen. I miss it.

Season 2 of ‘Eli Roth Presents: A Ghost Ruined My Life’ premieres on T+E on Friday, October 14 at 10 p.m. ET/PT during the channel’s annual Creep Week TV event, running from October 8-16.