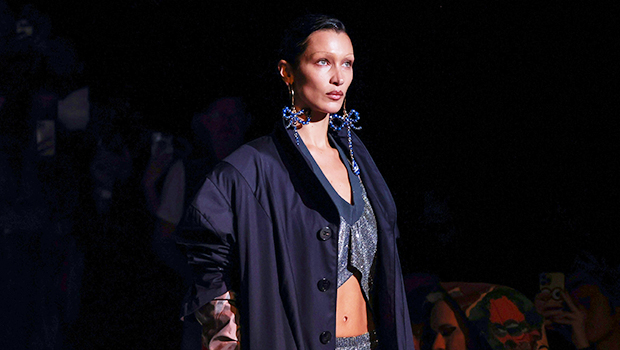 Bella Hadid is done staying silent about Kanye West‘s horrific Anti-Semitic social media posts that have caused the rapper to be banned from Twitter and Instagram, as well as the recent nasty comments he recently said about her sister Gigi Hadid, 27. On Oct. 11, Bella, 26, took to Instagram to share her thoughts about his recent behavior with her 55.7 million followers. Although she did not name Kanye, it is was an obvious response to his recent racist rant. Bella started off her message by letting her fans know that she has not been able to enjoy her birthday, which was on Oct. 9, because of his unacceptable behavior. 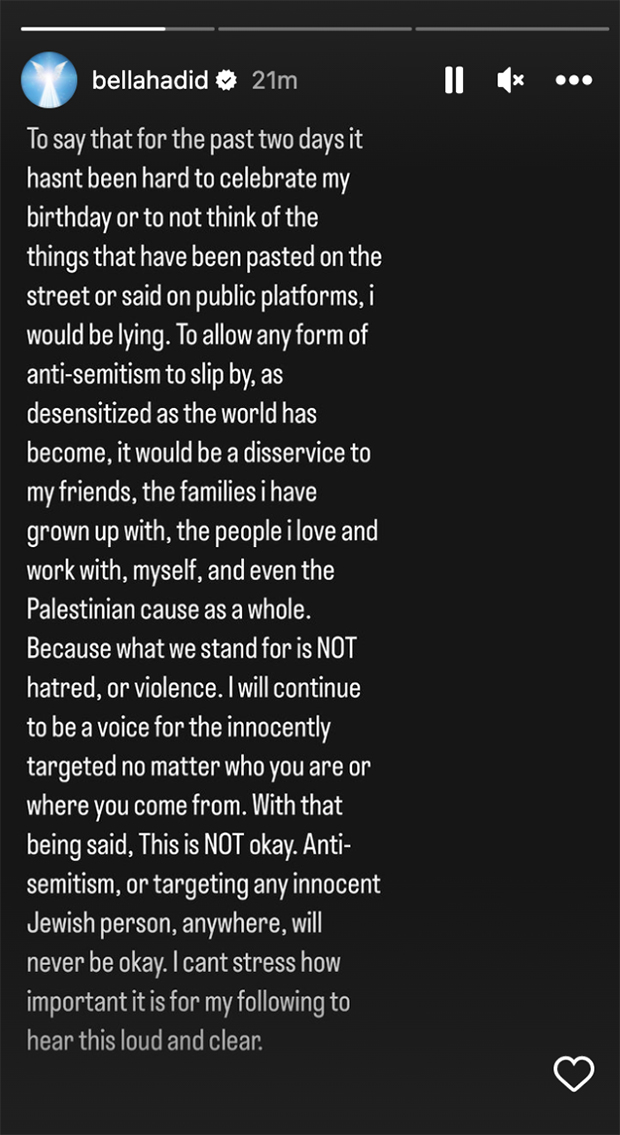 “To say that for the past two days it hasn’t been hard to celebrate my birthday or to not think of the things that have been posted on the street or said on public platforms I would be lying,” the supermodel started her post with. “To allow any form of Anti-Semitism to slip by as desensitized as the world has become, it would be a disservice to my friends, the families I have grown up with, the people I love and work with, myself, and even the Palestinian causes as a whole. Because what we stand for is NOT hatred or violence. I will continue to be a voice for the innocently targeted no matter who you are or where you come from.” 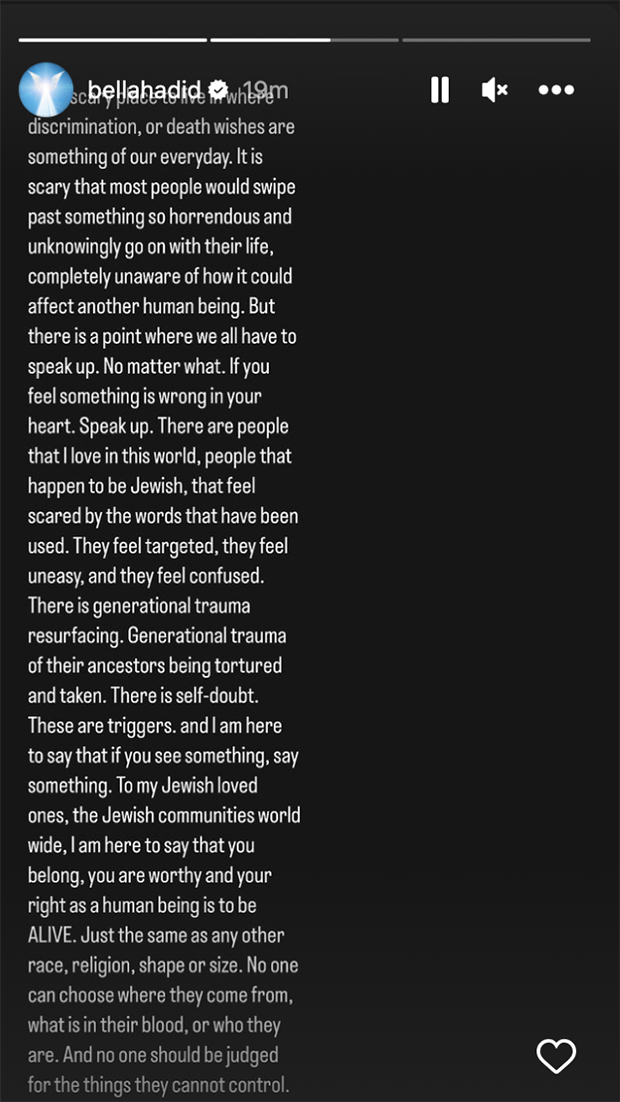 In another section of her post, which HollywoodLife included in this post, Bella told her followers to “speak up” against racism. “There is a point where we all have to speak up. No matter what. If you feel something is wrong in your heart, speak up. There are people I love in this world, people that happen to be Jewish, that feel scared by the words that have been used. They feel targeted. They feel uneasy and they feel confused. There is generational trauma surfacing.If you see someone saying anything Anti-Semitic, or being hostile to anyone that may be different than them, call them out. If they are acting on hate, call them out. Every. Time. Let there be no room for that kind of behavior in this world. To separate us would be the biggest downfall of all. We need to stand together always.” 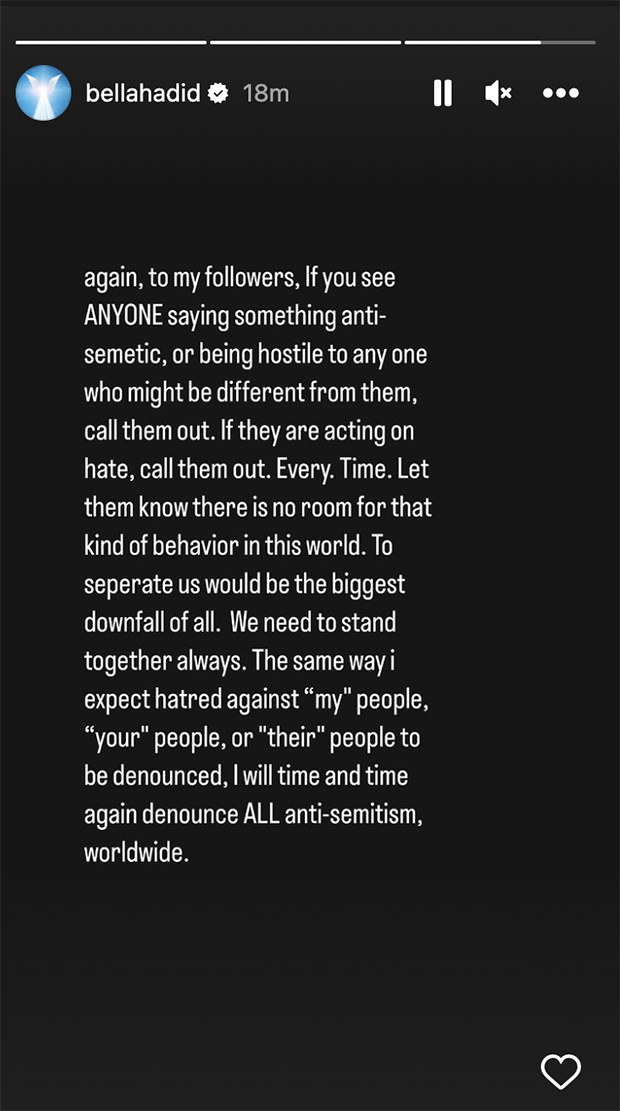 As reported, Kanye was banned from both Twitter and Instagram this week after he posted Anti-Semetic comments, which caused extreme backlash from fans and celebrities alike.  Kanye tweeted that he was going “to go death con 3 on Jewish people,” which is a military term that means to “increase in force readiness above normal readiness.” It would be used in situations that did “not pose an immediate danger but did warrant a significant alert.” Kanye went on to say that “black people cannot be Anti-Semitic because they are actually Jew also.” In addition to his racist rant on Twitter, Kanye went on Instagram and shared a text message with Diddy, who told him to “stop playing these games.” Kanye responded, “This ain’t a game. Ima use you as an example to show the Jewish people that told you to call me that no one can threaten or influence me. I told you this was war,” the text shared on Instagram read. Kanye captioned the post, “Jesus is a Jew.”

One week prior, Kanye inappropriately slammed Bella’s sister Gigi, who was the first celebrity to call Kanye out for his now-infamous “White Lives Matter” shirts worn at Paris Fashion Week. In the post, Kanye shared a TikTok video that was posted by Azealia Banks. In the post, she wrote, “You’re the cabbage patch. She’s the Barbie. You’re the cabbage patch. She’s Marcia and you’re Jan..” the confrontation between Ye and Gigi began after Gigi wrote a post that said Kanye was a “bully” and a “joke” for his verbal attack on Vogue editor Gabriella Karefa-Johnson, 31, who said that his shirts were “dangerous” and “violent.”

Juliana Nalu: 5 Things To Know About The Model Spotted Out With Kanye West

Dianña Returns With New Christmas Single
Exclusive Interviw with Avery Roberson
“Just Like You” by Chris McCooey
Change is Everything with Some Days Are Darker
Elektragaaz Releases “The Synaesthetic Picture Show: Part 6”