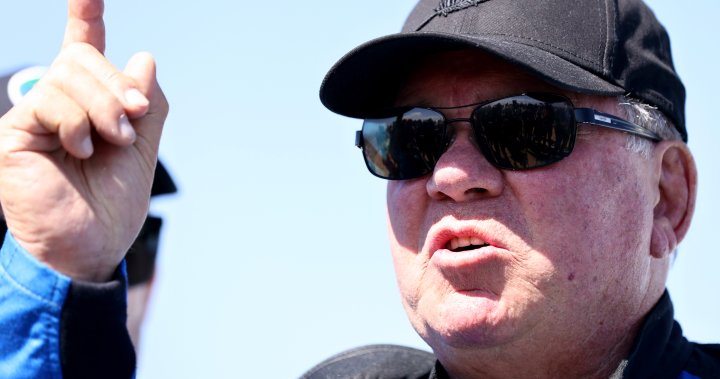 The Star Trek actor turned his on-screen explorations of the cosmos into a reality when he boarded Jeff Bezos’ Blue Origin space shuttle on Oct. 13, 2021, at 90 years old.

Now 91, Shatner is recounting his journey in his new biography Boldly Go: Reflections on a Life of Awe and Wonder.

In his book — a sample of which was published to Variety — Shatner wrote that the vastness of space was not what he’d expected. Though he had anticipated to be astonished and thrilled by the view from the Blue Origin pod, Shatner instead wrote, “There was no mystery, no majestic awe to behold . . . all I saw was death.”

“I saw a cold, dark, black emptiness,” he continued. “It was unlike any blackness you can see or feel on Earth.”

2:16
Space slam: How and why NASA crashed its DART spacecraft into asteroid

According to Shatner, while his fellow commercial astronauts enjoyed the thrill of weightlessness in space, the actor became quite existential.

Shatner wrote he expected the Blue Origin trip to be the “ultimate catharsis” for a human being, but it ended up being quite the opposite.

“I had a different experience, because I discovered that the beauty isn’t out there, it’s down here, with all of us,” he wrote. “Leaving that behind made my connection to our tiny planet even more profound. It was among the strongest feelings of grief I have ever encountered.”

With an unparalleled bird’s-eye view, Shatner was filled with “dread” as he worried about humanity destroying planet Earth beyond repair.

“My trip to space was supposed to be a celebration; instead, it felt like a funeral,” he wrote.

Sex-education icon Sue Johanson is back! New documentary examines her life and legacy

Still, Shatner claimed the space trip “reinforced tenfold my own view on the power of our beautiful, mysterious collective human entanglement, and eventually, it returned a feeling of hope to my heart.”

Shatner wrote that he hopes humanity will be able to “rededicate ourselves to the planet, to each other, to life and love all around us.”

Boldly Go: Reflections on a Life of Awe and Wonder is co-authoured by TV director, producer and writer Joshua Brandon. The book was released on Oct. 4 by the publishing house Simon & Schuster.