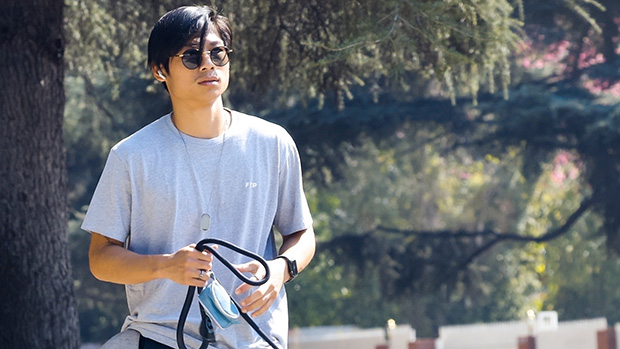 Pax Jolie-Pitt, 18, stepped out in public to walk his dog just a few days after his mom Angelina Jolie, 47, accused his dad Brad Pitt, 58, of being physically violent six years ago. The former couple’s son took his pup for a walk in the Los Feliz neighborhood in Los Angeles on Saturday, October 8. Pax dressed casual in a short-sleeved grey shirt and a pair of black jeans. The teenager also wore black aviator sunglasses, white sneakers, and AirPods in his ears.

Pax’s famous parents are locked in tumultuous legal battles over the custody of their children and the ownership of their Chateau Miraval winery. On Oct. 4, Angelina filed court documents that claimed Brad was physically abusive to her and their children during an incident in 2016. Allegedly, Brad got violent with Angelina and their kids while the family of six was traveling from France to California on a private jet, but the Bullet Train actor was cleared by Child & Protective Services in Nov. 2016 after an investigation into the situation. Angelina accused Brad of pushing her against the bathroom wall, before he allegedly “choked one of his children and struck another,” according to the filing. Angelina also alleged that Brad poured beer on her, as well as beer and wine on the children.

Brad’s representative denied the allegations in a statement to CNN. “(Jolie’s) story continues to evolve each time she tells it with new, unsubstantiated claims. Brad has accepted responsibility for what he did but will not for things he didn’t do. These new allegations are completely untrue,” the rep said. Brad was married to Angelina for two years before the Girl, Interrupted actress filed for divorce days after the alleged airplane incident.

Angelina’s legal filing where she accused Brad of physical abuse was a countersuit to a lawsuit that her ex-husband previously filed against her for selling her half share in their Miraval Chateau winery in 2021. Brad has slammed his ex-wife and accused her of trying to “inflict harm” on him by selling her stake to Russian Ogliarch Yuri Shefler, the owner of the company which makes the Russian vodka Stolichnaya.

The former couple are also at odds over custody of their four minor children, Zahara, 17, Shiloh, 16, and twins Vivienne and Knox, 14. Brad was given 50/50 joint custody in May 2021, but just two months later, Angelina won her attempt to have the judge in the custody case removed, which undid the ruling. Brad later petitioned the California Supreme Court to review the case so he could get joint custody of the kids again, but that request was denied.