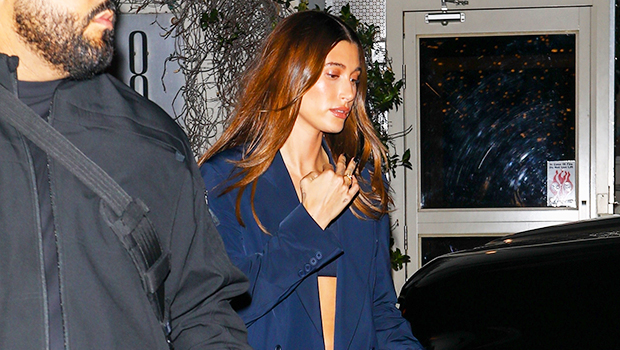 Above the drama. Hailey Bieber, 25, tried to stay out of the fray while out in West Hollywood on Thursday night. The model wife of Justin Bieber cut a chic figure as she arrived for a Lacoste event at the ritzy Sunset Tower, just hours after Kanye West, 45, taunted her as  “nose job Hailey Baldloose.”

The Arizona-born model-turned-skincare guru may have had a lot on her mind, but she looked effortlessly elegant during the LA outing. Slipping into something comfortable and chic, Hailey went with baggy blue pants slung low and her hips and paired with a tiny crop top to reveal the maximum amount of abs. She tossed a boxy jacket on top, giving the look one of her signature oversized silhouettes.

The Rhode Skin founder didn’t waste time getting inside the event. She and her security team made a beeline for the entrance, avoiding any questions about Kanye’s slight.

Earlier in the afternoon, the Yeezy designer went on one of his notorious social media tirades. He took aim at both Hailey and fellow model Gigi Hadid, following their support for fashion editor Gabriella-Karefa Johnson, who publicly criticized his Paris Fashion Week show and controversial “White Lives Matter” shirts as “irresponsible” and “deeply offensive.”

Talking about his vision for the fashion world, Ye lavished model Vinetria with praise before turning to his two critics. Appearing to refer to the fashion establishment as “they,” he said, “THEY want corny ass Gigi Hadid and nose job Hailey Baldloose [Bieber] to rally behind an obvious Corey Gamble level nonfashion industry plant.” Previous Kanye posts said Gabriella, a recently-celebrated member of this year’s Business of Fashion BoF500 list, was “not a fashion person” and he mocked her appearance in a now-deleted post.

Judy Tenuta: 5 Things On The ‘Love Goddess’ Comedian Who Died At 72

Hailey defended the fashion editor after Gabriella spoke out against the Donda rapper. “My respect for you runs deep my friend!” Mrs. Bieber shared in an Instagram comment. “To know is to adore you and to work with you is an honor…the most kind. the most talented. the most fun. the most chic.”

Kanye couldn’t help but stir the pot, asking Hailey’s husband, “Wait Am I canceled again??? Justin please let me know.” In a separate, more antagonistic post, he wrote, “Justin, get your girl before I get bad.”