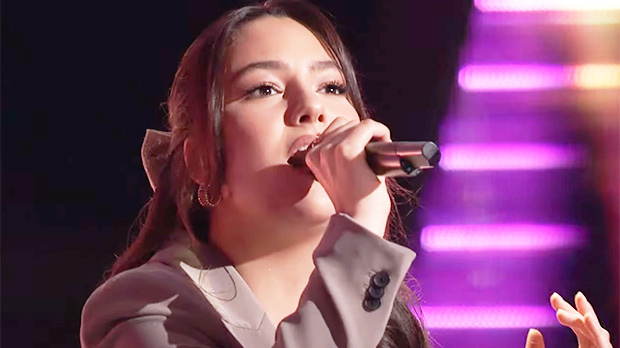 Grace Bello starts off her Blind Audition strong in this EXCLUSIVE preview of the all-new episode of The Voice. She showcases her beautiful vocals right away singing Justin Bieber’s “Ghost,” which causes John Legend to turn his red chair first. Blake Shelton and Camila Cabello follow John’s lead by turning their red chair. Gwen Stefani holds out until the very end.

After earning that 4-chair turn and finishing off her performance on a terrific note, Grace gets the chance to talk to the coaches. Grace is 21 years old. She grew up in Texas, but she just moved to Washington.

“You just have so much control, and your tone is so beautiful,” John tells Grace. “I think we can make some beautiful music on this show.”

Gwen points out that it’s “really rare that somebody will show that many sides of their voice or that they even have that many sides to their voice. You were able to get tender with your voice and really listen to the lyrics of what you’re saying, and that’s also rare for someone so young.” She adds that there’s “nobody like you” on her team.

Camila knows that Grace likes pop music from her song choice. The “Havana” singer thinks exploring song choices with Grace would be a fun experience. She tells Grace that she heard a little bit of Ariana Grande in Grace’s voice. Grace notes that she is Sicilian and knows that Ariana is Italian. Grace also reveals that she’s Cuban like Camila.

Blake knows he doesn’t stand much of a chance of getting Grace on his team. “Your voice is magical,” Blake says to Grace. “Maybe I don’t know much pop music, but it doesn’t mean I’m not a fan. I would just represent you as somebody who’s done this now for a long time, and I can’t think of anything that would be more different and weird than if you chose me as your coach.”

Bodie: 5 Things About ‘The Voice’ Singer Blake Shelton Thinks Can Make It To The Finale

Camila pulls out John’s team jacket that she’s updated to say “Camila Is A Legend.” John quickly stands up and shows off the real Team Legend jacket. After the coaches have made their pitches, it’s time for Grace to pick her coach. The Voice season 22 airs Mondays and Tuesdays on NBC.