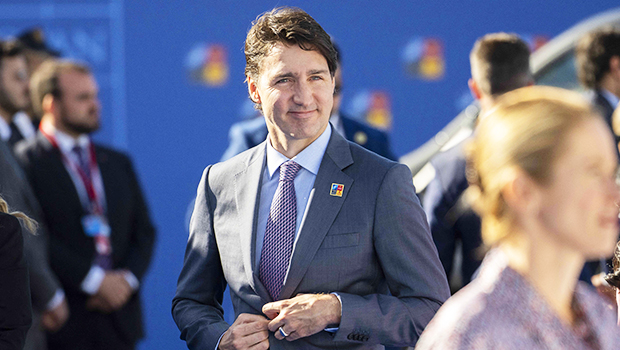 Canadian Prime Minister Justin Trudeau showed that he’s incredibly courageous in an awesome new video of him going bungee jumping with the Great Canadian Bungee in Quebec on Sunday, October 3. Alongside his two older kids, Trudeau, 50, leaped from the highest bungee tower in all of Canada for an amazing feat, and it seemed like he had a great time, even if he was clearly a little nervous.

Great Canadian Bungee shared the amazing video of the prime minister in a red flannel and jeans as he went to take the dive. As the bungee instructors were counting him down, it sounded like he was saying, “Oh, s**t,” and appeared nervous. After he took the plunge, the top of his head hit the lake below then and he got all wet after the major dive.

The company congratulated Trudeau and his son Xavier, 14, and daughter Ella-Grace, 13, for performing the amazing stunt. “You never know who you will encounter on the bungee tower at Great Canadian Bungee!” they wote. “Canadian Prime Minister Justin Trudeau came to jump this morning with his son Xavier and daughter Ella-Grace. Props to them on some fantastic jumps and even some water dips.”

It’s unclear if Trudeau’s wife Sophie Grégoire Trudeau or his younger son Hadrien, 8, were also along for the bungee jumping adventure, but it seems like the father had fun with his two elder children for the adventurous activity. The trip, which was a few weeks after the prime minister attended Queen Elizabeth II’s funeral service, appeared to be to celebrate his older son’s birthday.

Great Canadian Bungee manager Richard van Bruygom said that the dad and kids all did a “fantastic job,” in an interview with Narcity. “The kids were anxious like everybody else because you see the tower from where you’re standing but once they got up there both… had really had fantastic jumps,” he told the outlet. “There was no hesitation on the part of the children that jumped. They were all eager and maybe that put a little bit of pressure on the prime minister, you know, having to jump, but I don’t think so. He just jumped and that was it.”