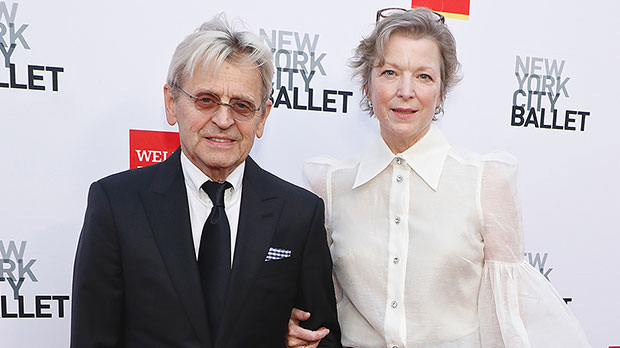 Sex and the City‘s Aleksandr Petrovsky is back! Mikhail Baryshnikov, 74, who plays the beloved character on the hit HBO series, was spotted at the New York City Ballet’s 10th Annual Fall Fashion Gala alongside his wife Lisa Rinehart, 71. The cute couple attended the event on Sept. 28, in honor of his former costar, Sarah Jessica Parker, 57. Mikhail looked elegant in a red carpet classic look featuring a black suit and tie, paired with black dress shoes. He also completed the timeless ensemble with a pair of light brown glasses, as he held his wife on his arm. Lisa stunned with a chic white transparent button-up blouse with puffed-up sleeves. The 71-year-old opted for a pair of black velvet trousers, and metallic open-toe sandals.

While Mikhail and Lisa showed up to support SJP, the star of SATC was nowhere in sight. Unfortunately, SJP had to abruptly back out of the event due to a family emergency. A rep for the actress confirmed to HollywoodLife that her absence at the event was due to the sudden passing of her stepfather, Paul Giffin Forste, 76. “Our family is sad to announce that after an unexpected and rapid illness, Paul Giffin Forste passed away yesterday at age 76,” the statement said. While she was set to be honored at the gala on Sept. 28, an event attendee told Page Six that it was announced that SJP could not attend due to a “sudden devastating family situation.”

Mikhail’s appearance on the red carpet also comes just two weeks after he appeared on the Vogue World runway on Sept. 13. The actor and professional dancer showed up on the runway wearing a beige trench coat, a white button-up, and black trousers. He was also spotted with the same cool brown glasses that he wore on Sept. 28! Mikhail danced along the runway and impressed many people in the audience during New York City Fashion Week.

Both Mikhail and SJP have been friends for many years, as they starred together in SATC for the series’ final season. The Latvia native played the role of Aleksandr Petrovsky, a Russian art sculptor, and Carrie Bradshaw’s boyfriend. Aleksandr and Carrie had an intense relationship during the show’s sixth season, but ultimately Carrie decided that she wanted a “ridiculous, inconvenient, consuming, can’t live without each other, kind of love.” By the end of the series she said goodbye to Mikhail’s character and married Big.

The 74-year-old has been married to Lisa for over 16 years, as they got married in 2006. Together they both share three children: Anna Baryshnikov, 30, Sofia-Luisa Baryshnikova, 28, and Peter Andrew Baryshnikov, 33. He also has one daughter, Shura Baryshnikov, 41, who he welcomed with actress, Jessica Lange, 73, in 1981.