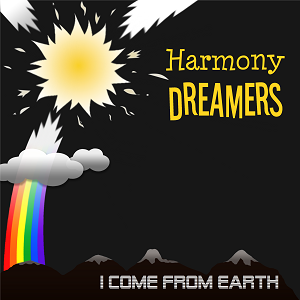 You cannot claim Byron Lee Scott lacks ambition. “I Come from Earth”, the title song of Harmony Dreamers’ album, introduces newcomers to his songwriting with a real dazzler. There’s an expanding roll call of musicians from various nations and walks of life enlisted to make these songs come alive and the drumming popping throughout the opener testifies to the inspired fire making these songs fly. There are plenty of other examples, however.

Scott and his fellow singers/musicians move from one style to the next without missing a beat. “Pass It On” is one of the many songs written and recorded for this album that stresses strong vocal presentation without shirking the remainder of the song. One of the chief aims behind these songs is to promote unity and accord between the varied people in our world so, perhaps, it is a little odd that there’s such stylistic dexterity defining this release.

It’s the source of its greatest strength. There’s comedy value in the opener that sweetens an otherwise intense musical arrangement. Scott shows he understands the need for effective contrasts on an album even more with the second track’s turn. “Sophie and Pearl” puts an exclamation point on that. Dropping unexpected instruments such as vibraphone and clarinet into these songs could backfire as gimmicky affectation.

It doesn’t. Peppering a track about something as simple as cats with unexpected musical moves is indicative of the playfulness defining much of the release. It won’t be the last time listeners encounter that characteristic. Of course, a song such as this actually says more about the songwriter than the supposed subject. Scott’s guitar plays a more prominent role again in the song “No Stopping” but shares the canvas with other instrumental colors. It shares the same pulsing center heard in other songs and says a lot about his ability to inhabit various genres without striking a false note.

The vocal harmonies in the second part of “Spinning Round the Sun”, and “Loving the Sun”, are the marquee moment of the song’s several parts. It is a brief piece but its light ethereal tilt more than meets the song’s obvious standards. Part 3 of the song, however, “Solar Rays”, is a longer and even more fulfilling piece, however, as it affords Scott and the musicians involved an opportunity to more fully develop the song’s musical ideas. Another track later in the album that will catch listeners’ attention is “Waiting for You” thanks to its memorable percussion and uplifting vocal treatment.

I Come from Earth is ambitious, but it does leave listeners mired in obscurity or bite off more than it can chew. Byron Lee Scott does a fantastic job of reining in his impressively broad vision into an album’s worth of songs, but many listeners will come away from this believing the sheer wealth of material justifies a second volume. Let’s hope he’s reading this review at some point and agrees with its assessment. Harmony Dreamers’ I Come from Earth is a winner from start to finish.