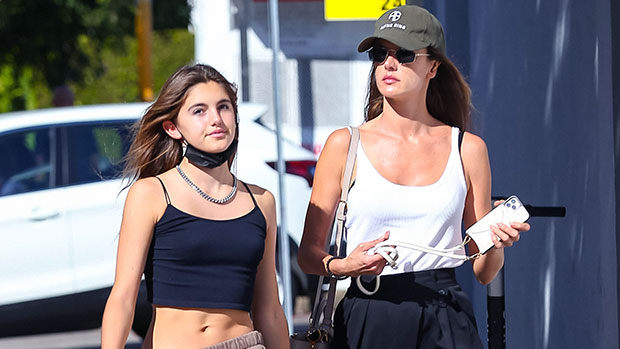 Alessandra Ambrosio is one doting mama! The gorgeous supermodel, 41, was spotted treating her lookalike daughter Anja LouiseMazur, 14, to a fun day of retail therapy in Los Angeles on Friday (September 16). The mother/daughter duo were joined by Alessandra’s boyfriend, fellow model Richard Lee, as they took over the sidewalks of the tony, seaside town of Venice, as seen in photos here.

The Victoria’s Secret icon, who shares Anja with her former fiancé Jamie Mazur, kept it casual in a graphic tee and baggy, bright orange sweatpants. She rocked white sliders, a designer handbag and a set of oversized sunglasses. As the weather began to warm up, she changed out her pants for some daisy dukes. Her mini-me Anja was dressed in a fun Harley Davidson top and shorts, while she matched with mommy in her white sliders! Richard, meanwhile,  pulled up the rear in a simple tee and board shorts.

The mother of two — Alessandra and Jamie also share 11-year-old son Noah Phoenix Mazur — recently opened up about how she keeps in such incredible shape after having her children. “Your body will never go back to exactly what it was before pregnancy, whatever people tell you. It can’t,” she told Net-a-Porter’s The Edit. “But I think I have a better body now than before I had kids. It’s partly because I work out…Not that it was easy getting back into shape post-pregnancy; after having Anja I only had three months to lose all the weight and I was on this 1200-calorie-a-day meal-delivery service that I hated.” She added, “I couldn’t do that again.”

When she’s not paying tribute to her family, Alessandra is spending time with her beau Richard. The pair officially confirmed their relationship when they were spotted kissing in March 2021. Richard seems quite enamored by the beauty, as he recently promoted her hosting job on The Cut. “I am so proud of this incredible woman who took the challenge of doing something new and getting out of her comfort zone,” he said on Instagram. “Her dedication and work ethic was and is awe inspiring. She is a consummate professional and was kind and gracious to everyone on set. She was vulnerable and genuine- her most attractive traits! As always, she kept a great attitude and amazing energy through many very long days. Voce é maravilhosa, hot lil mama. I am blessed that you have shared your world with me.”