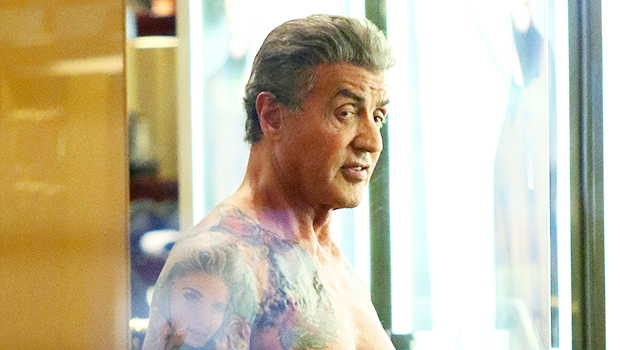 Sylvester Stallone, 76, removed his second tattoo of his ex Jennifer Flavin, 54, and replaced it with intricate new ink. Tattoo artist Zach Perez shared a video of the tattoo-removal process on Instagram Sept. 11. Sly originally had a tattoo of Jennifer’s eyes on his left arm, but now he has the face of a leopard tattooed on him. Zach also “reworked” the horse tattoo that already existed on the actor’s arm.

Sly got the first tattoo of his estranged wife removed in early August, which sparked the rumors of their impending divorce. The arm tattoo featured a huge portrait of Jennifer’s face and was transformed into a tattoo of his late dog Butku. In a statement to TMZ after Jennifer filed for divorce, the Oscar nominee claimed that he went to the tattoo artist to get the ink fixed, but after it was ruined, he covered it up completely with the tattoo of Butkus.

After 25 years of marriage, Jennifer filed for divorce from Sly on Friday, August 19. The model reportedly accused Sly of “moving assets from marital funds.” TMZ reported that the longtime couple broke up because of an issue over Sly’s Rottweiler dog, but the iconic actor clarified that they didn’t end their marriage over “such a trivial argument.”

Sly and Jennifer will remain in each other’s lives as they co-parent their daughters Sophia, 25, Sistine, 24, and Scarlet Stallone, 20. After the split, Sly issued a statement to TMZ where he praised Jennifer and made it seem like there’s no bad blood between the exes. “I have the highest respect for Jennifer,” Sly said. “I will always love her. She’s an amazing woman. She’s the nicest human being I’ve ever met.”

It’s possible Sly and Jennifer’s split will play out on television. The Stallone family is getting their own reality TV show that is set to premiere this December on Paramount+. We’ll have to wait and see if Sly and Jennifer were open about their marital struggles when they filmed the show.

Sylvester Stallone’s Wife: Everything To Know About His 3 Marriages After Jennifer Flavin Split

Miles Teller Jokes He ‘Grew A Mustache’ For ‘Top Gun’ While Tom Cruise ‘Did His Own Stunts’ On ‘SNL’
These Comfy Bralettes Have Over 3k Reviews, Come In A Pack Of 3 & Are Under $30
Lena Dunham sparks backlash after saying she wants her coffin ‘driven through NYC Pride parade’
Jeffrey Dahmer’s Prison Glasses For Sale At $150k
How Rent the Runway CEO Jennifer Hyman Built a ‘Willy Wonka Land of Fashion’