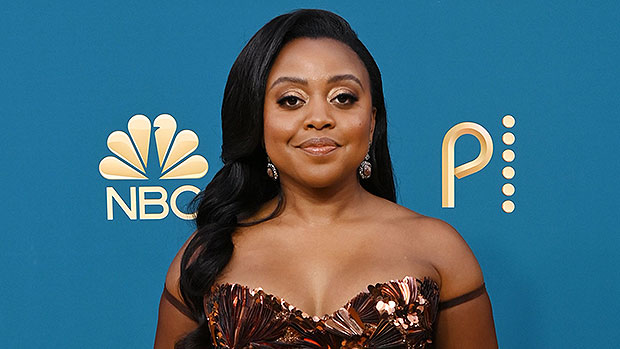 Quinta Brunson, 32, just have Jimmy Kimmel, 54, a taste of his own medicine — all in good fun, of course. The Abbott Elementary writer and star showed up to Jimmy Kimmel Live on Sept. 14, and interrupted his monologue to thank her loved ones. After Jimmy told her she was “a little bit early for your interview,” Quinta said, “Oh I know, but I have a little favor to ask.”

She continued, “You know how when you win an Emmy you only have 45 seconds to do an acceptance speech — which is like not that much time — and then you get less time because someone does a dumb comedy bit that goes on a bit too long?” The award-winning actress was directly referencing Jimmy laying down on stage and giving a thumbs up as part of a comedy bit that continued as Quinta went on to accept her award on Monday night, which sent Twitter into a frenzy.

Quinta then admitted that she was “demanding” to have a few more minutes to “thank a couple of extra people I didn’t get to thank on Monday night.” Rightfully so!

After she admitted why she interrupted the TV host, Jimmy gladly stepped back and let her have her moment. “Absolutely, take all the time you like, I’ll go stand back here,” Jimmy said as the crowd cheered. Quinta thanked a list of her team and the fans of the show, as well as “the internet” for “raising” her. “And to all my Abbott Elementary writers watching, I wouldn’t have this without you – now please go to bed we have work tomorrow,” the actress joked. Jimmy then had Quinta conveniently introduce the commercial break and the show’s schedule for the evening before they sat down for her interview.

The Philadelphia-born actress looked as beautiful as ever on the Jimmy’s show. She wore a stunning pink cocktail dress with feathered sleeves and a feather-trim along the hem of the dress. She completed the look with pink satin pumps, and the best accessory of all – her first Emmy award! The beauty also wore her brunette tresses parted down the middle with a chic Hollywood curl.

Quinta took home her first Emmy on Monday night, winning in the category of Outstanding Writing For a Comedy Series. Her win is a historic one, as Quinta is the second Black woman of all time to win in this specific category. Prior to Quinta, actress Lena Waithe, 38, took home the same award with Aziz Ansari, 39, back in 2017 for their work on Master of None. And not only does Quinta write and star in the ABC sitcom, she is also the show’s creator!

Prince Andrew’s Kids: Everything To Know About Princesses Beatrice & Eugenie

Jimmy’s show took to social media on Sept. 14 to share the hilarious moment as well. The show captioned the tweet, “Look who interrupted Jimmy’s monologue tonight!” And they also shared the same post to the show’s official Instagram as well. Quinta also took to her Instagram account to celebrate her historic win with a series of photos from the milestone evening. She captioned one post, “Won an Emmy :)”, and another, “Some Emmy moments :).” The comedian wore a custom Dolce & Gabbana shimmering gold gown on Monday night, which she shared the details of on her Instagram.

Quinta rose to fame when she began filming her own Instagram series called Girl Who Has Never Been on a Nice Date. She later went on to work with Buzzfeed Video and star in Quinta vs. Everything. She has been married to her husband, Kevin Jay Anik, since 2021.