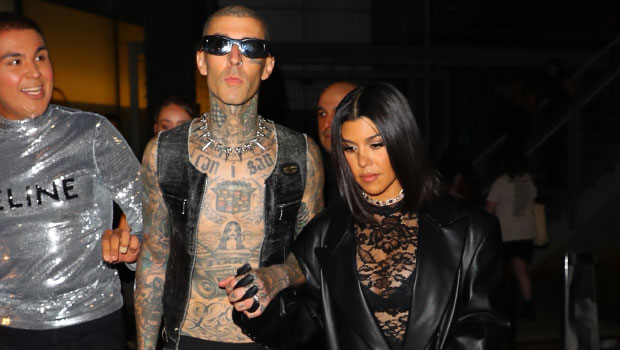 Kourtney Kardashian, 43, and Travis Barker, 46, turned heads on Sept. 13 when they showed up to New York Fashion Week looking incredible! The newly married couple walked the runway at the Boohoo by Kourtney Kardashian show while holding hands and smiled to each other with love. Kourtney rocked a lacy black see-through catsuit under a long black leather jacket and black boots while Travis went shirtless under a black vest, and added dark jeans, boots, and sunglasses to the look.

Although Kourtney and Travis’ appearance at the fashion show, which promoted Kourtney’s line with Boohoo, proved to be epic, the show didn’t go without its mishaps. “The show started with a literal bang — they blew a fuse or something and the show had to stop and restart twice,” an onlooker EXCLUSIVELY told HollywoodLife. “It didn’t appear that Kourtney had any family there, but she walked hand in hand with Travis to her seat before the show started and then backstage after. The collection was all looks Kourtney would wear, lots of rocker tees, lace, leather, & black.”

It turned out there were also some pieces inspired by Travis and his band, Blink 182. “There were a few [pieces from the collection] that said Blink 182 and on the back said, ‘Hello Angel of My Nightmare.’ “What’s My Age Again?” By Blink 182 was also on the rock-inspired playlist,” the onlooker shared.

In addition to Kourtney and Travis, other familiar faces at the show included Real Housewives of New Jersey star Teresa Giudice, her daughters Milania and Gia, and Gia’s boyfriend, Christian. Paige DeSorbo & Remi Bader also sat next to them, according to the onlooker.

Just two days before the Boohoo show, Kourtney and Travis made headlines for attending the Tommy Hilfiger NYFW show. The drummer gave a surprise performance at the event, which took place at Brooklyn’s Skyline Drive-on, and it was an unforgettable time. Kourtney showed off another flattering look that included a black and grey catsuit with a pair of black high heels and matching sunglasses while Travis wore a red, white, and black puffer jacket and black shoes.

Don’t Worry Darling’s Plot Twist Is Its Ultimate Undoing
The Woman King Proves the Possibilities Are Endless for Thuso Mbedu
Billy Ray Cyrus, 61, ‘Engaged’ To Singer Firerose 5 Months After Tish Filed For Divorce
Kick-Ass’ Chloë Grace Moretz Gets Candid About ‘Chaotic’ Paparazzi Experiences She Had After Appearing In the Movie
8 of the Best Word Search Games