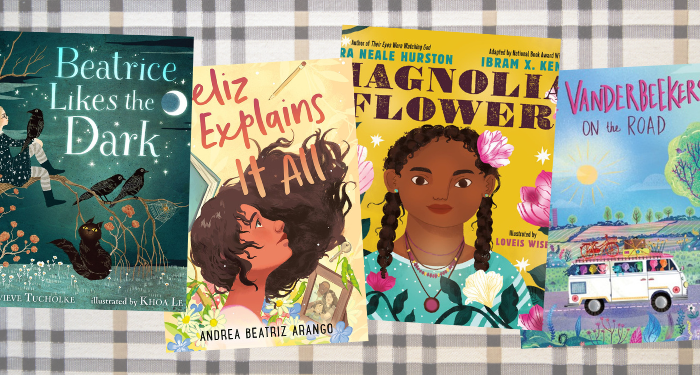 It’s September! September feels like one of those weird in-between months, not quite summer, but not quite fall either. At least, not here in Tennessee. While October is full of pumpkins and Halloween prep, and August is full of pools and playgrounds right before school starts, September is just sort of there. But while the month may feel a bit nebulous, September children’s book releases are spectacular. I had the hardest time ever narrowing down my selection to 12 books. I could’ve easily made a list of 20. In picture book new releases, some of my favorite authors and illustrators, like Julie Flett, Ryan T. Higgins, and Kate Messner, return with new books. In middle grade new releases, Kwame Alexander returns with possibly his best book yet, and several books explore mental health in really meaningful ways.

Many authors on this list have tweeted about how their books will not be carried by Barnes & Noble after B&N’s decision to shelve only the top 1-2 bestselling children’s books per publisher. This decision disproportionally affects marginalized authors. I encourage readers to buy locally or buy online from places like bookshop.org. If a local bookstore isn’t carrying a book you want, call and ask them to stock it. 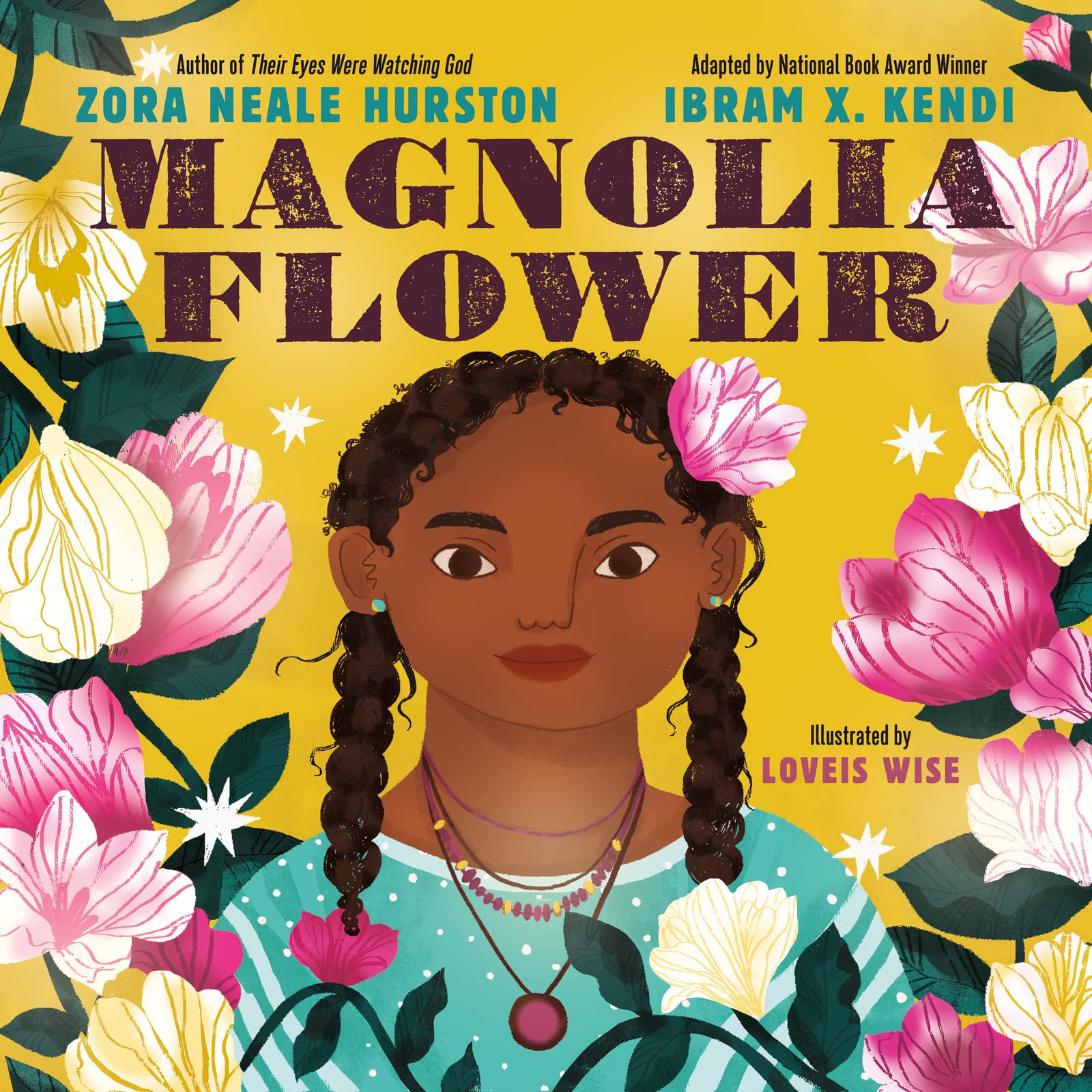 Ibram X. Kendi (How to be an Antiracist) adapts one of Zora Neale Hurston’s short stories in this stunning picture book about the transcendent power of love. Magnolia Flower is the child of parents who survived the Trail of Tears and slavery. When she falls in love with a poor, formerly enslaved person, her father forbids their marriage. But Magnolia Flower knows the best way to live is to follow her heart, so she and her lover take a boat between trees and find another place to live where they will be accepted. Decades later, Magnolia and her husband revisit her old home, particularly the three trees where their love first bloomed. 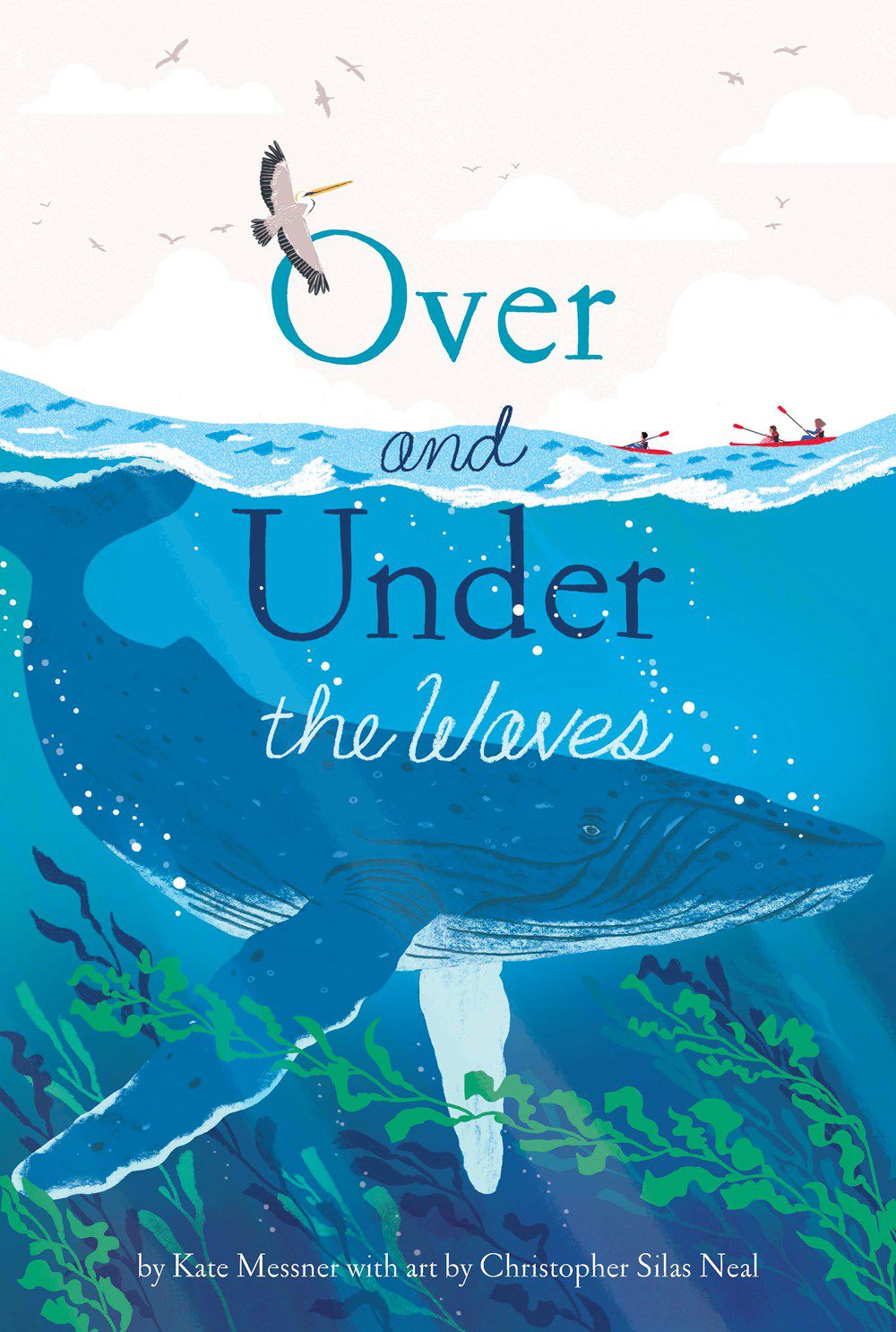 Over and Under the Waves by Kate Messner & Christopher Silas Neal (September 13; Chronicle Books)

I adore this nonfiction series about nature, which I believe now has six books in it. This latest installment depicts the beauty of the sea with a family kayaking over the waves. Beneath the waves, schools of silver fish swim by, leopard sharks prowl, and an octopus blends in with rocks. Above the waves, humpback whales break the surface, kelp floats by, and shorebirds sing. The child and their parents observe it all. The back matter gives more information about the sea life depicted in the illustrations. 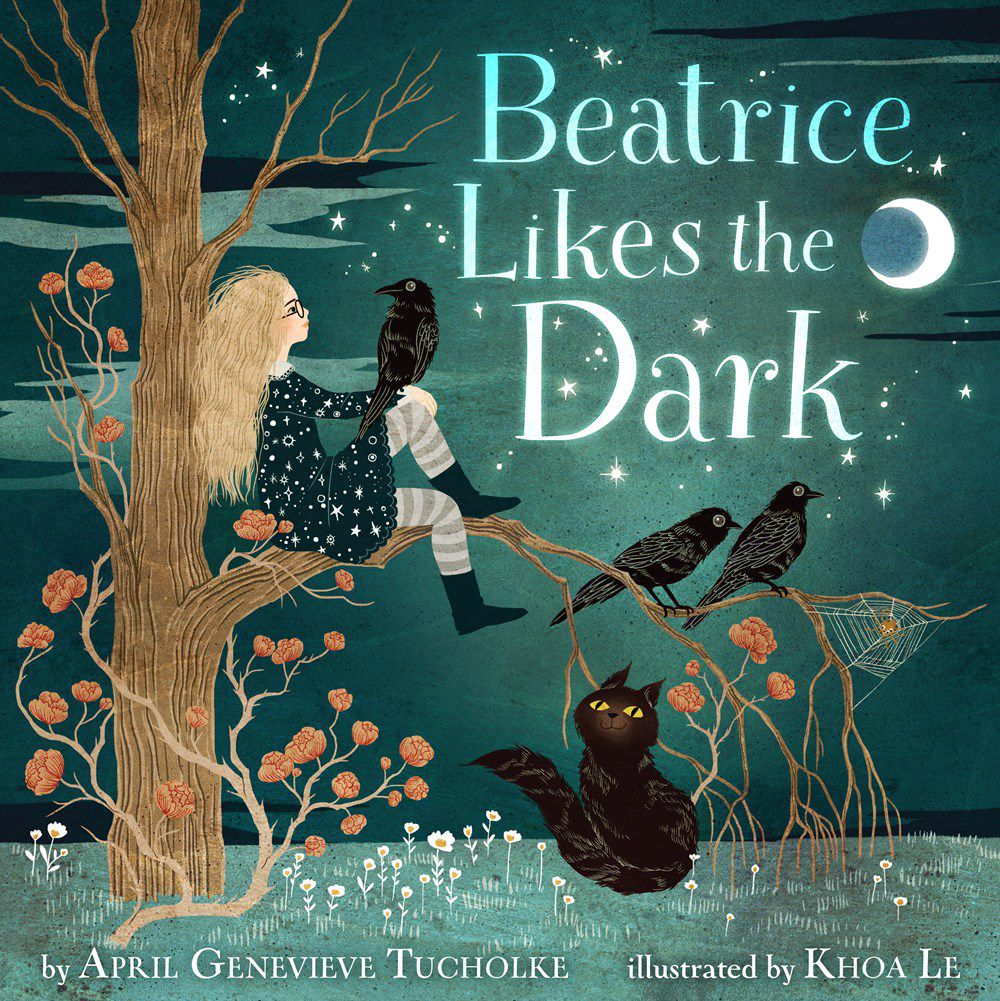 This is Algonquin Young Readers’ first foray into picture books, and it is a stunningly beautiful book about sisterhood. Sisters Beatrice and Roo could not be more different. Beatrice loves bats, wearing black, spiders, and especially night. While having picnics at a graveyard in the middle of the night sounds utterly charming to Beatrice, it’s a nightmare for Roo. Roo loves wearing bright colors — like pink! — investigating flowers, picking strawberries, and especially waking up early and enjoying the sun. She’d much rather have a picnic in her treehouse. The sisters often glare at one another. But when Roo has a nightmare, Beatrice shows her how to enjoy the night, and the next day Roo shows Beatrice there are things to appreciate about the day. Despite their differences, they are sisters, and sisters stick together. Khoa Le is one of my favorite children’s book illustrators, and it’s impossible to imagine this picture book illustrated in any other way. It’s perfection from start to finish. 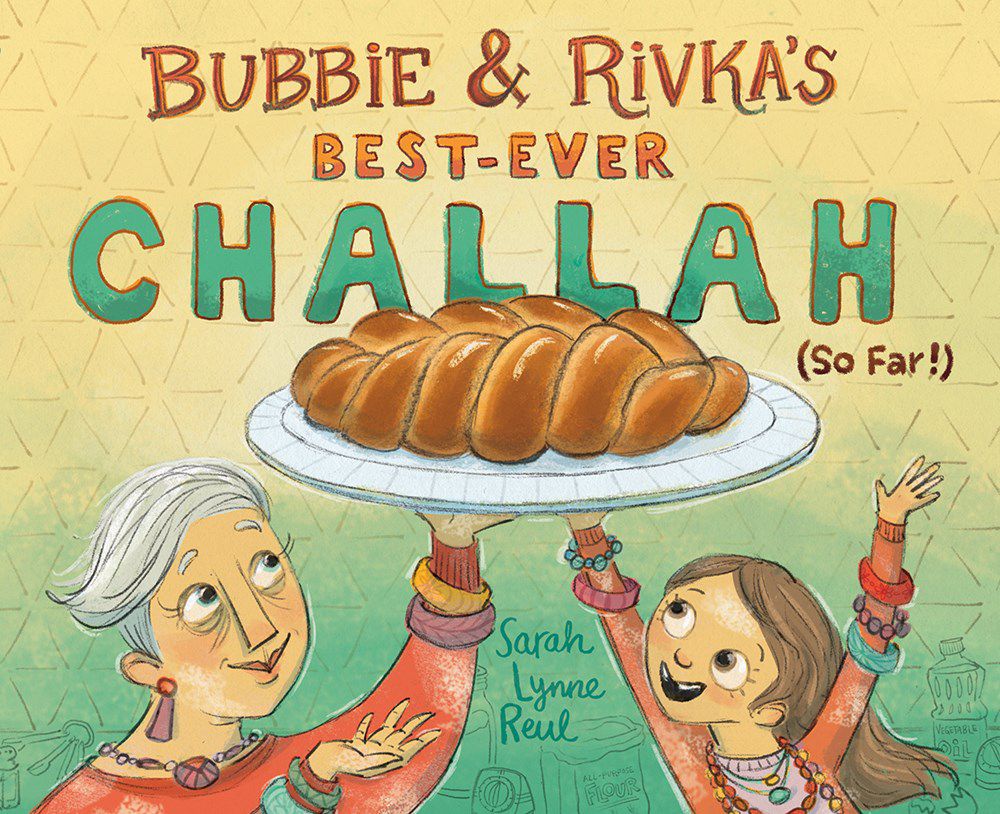 In this delightful Jewish intergenerational picture book, a grandmother and granddaughter attempt to make challah together. Despite being poor bakers, Bubbie and Rivka are determined to make the perfect challah. Every Friday, they try a new recipe, but while they have a blast cooking and playing together, their challah inevitably comes out less than perfect. In fact, it’s often inedible. But with lots of trial and error, they finally succeed in making the best-ever challah. I’m always here for picture books that emphasize enjoying the process over the end result, and this book does that so well. 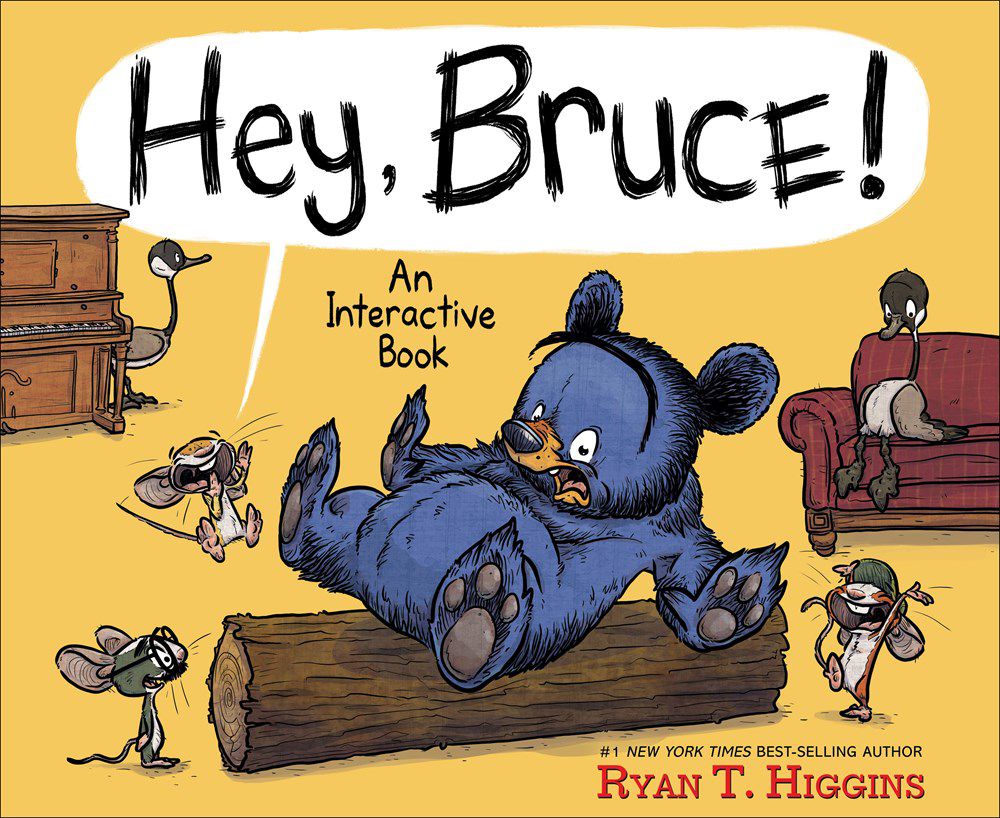 Ryan T. Higgins writes some of the funniest picture books ever. My daughter and I have laughed until we cried with every book in the Bruce series, which begins with Mother Bruce (though they can be read in any order). Hey Bruce! is the first interactive book in the series, and let me just say, it’s a blast. Interactive picture books are my daughter’s favorites. If you have a child from 3-6 or teach children between those ages, you have to try interactive picture books with them if you haven’t already. In this one, the mice Rupert, Thistle, and Nibbs invite the reader to have some fun with Bruce, a grumpy bear who, nonetheless, has a big soft heart and a large mixed-species family as a result. 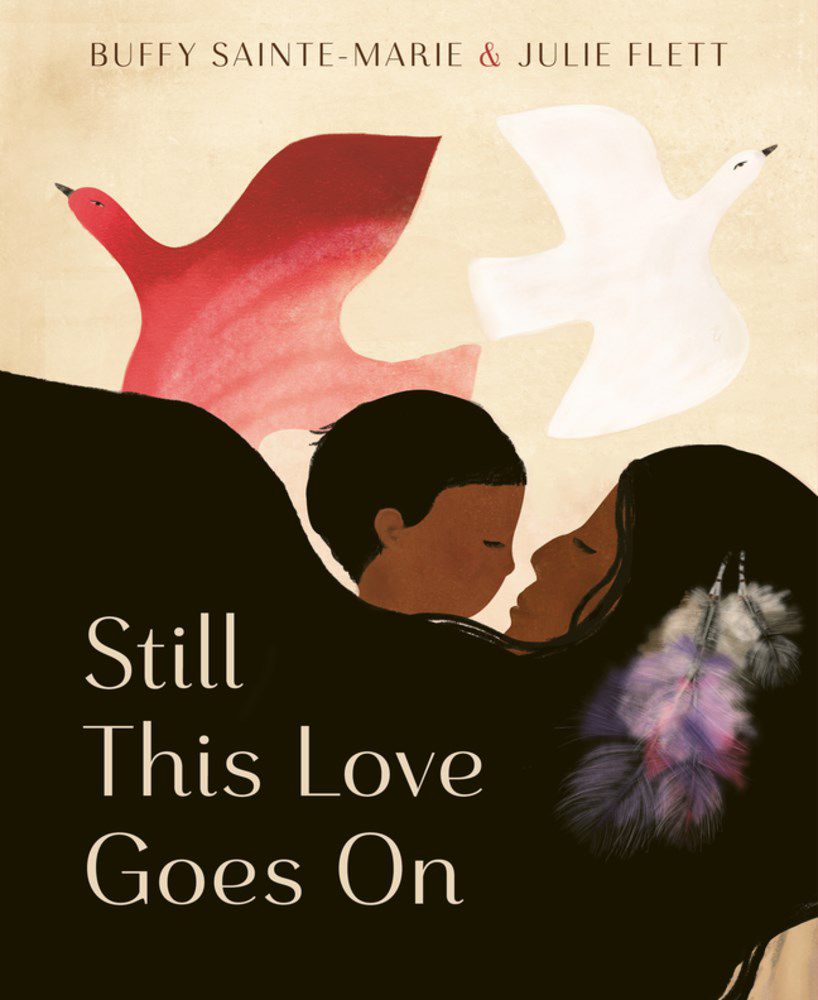 Based on the song by award-winning Indigenous musician Buffy Sainte-Marie, this beautiful picture book celebrates familial love and nature. The illustrations by Cree-Métis author and illustrator Julie Flett are gorgeous and joyous, from a child running through a field of bright yellow summer flowers to jingle dancers dancing to soaring songs. I want to frame some of these! Sheet music to the song is included in the back. This would make a lovely gift to a new parent. 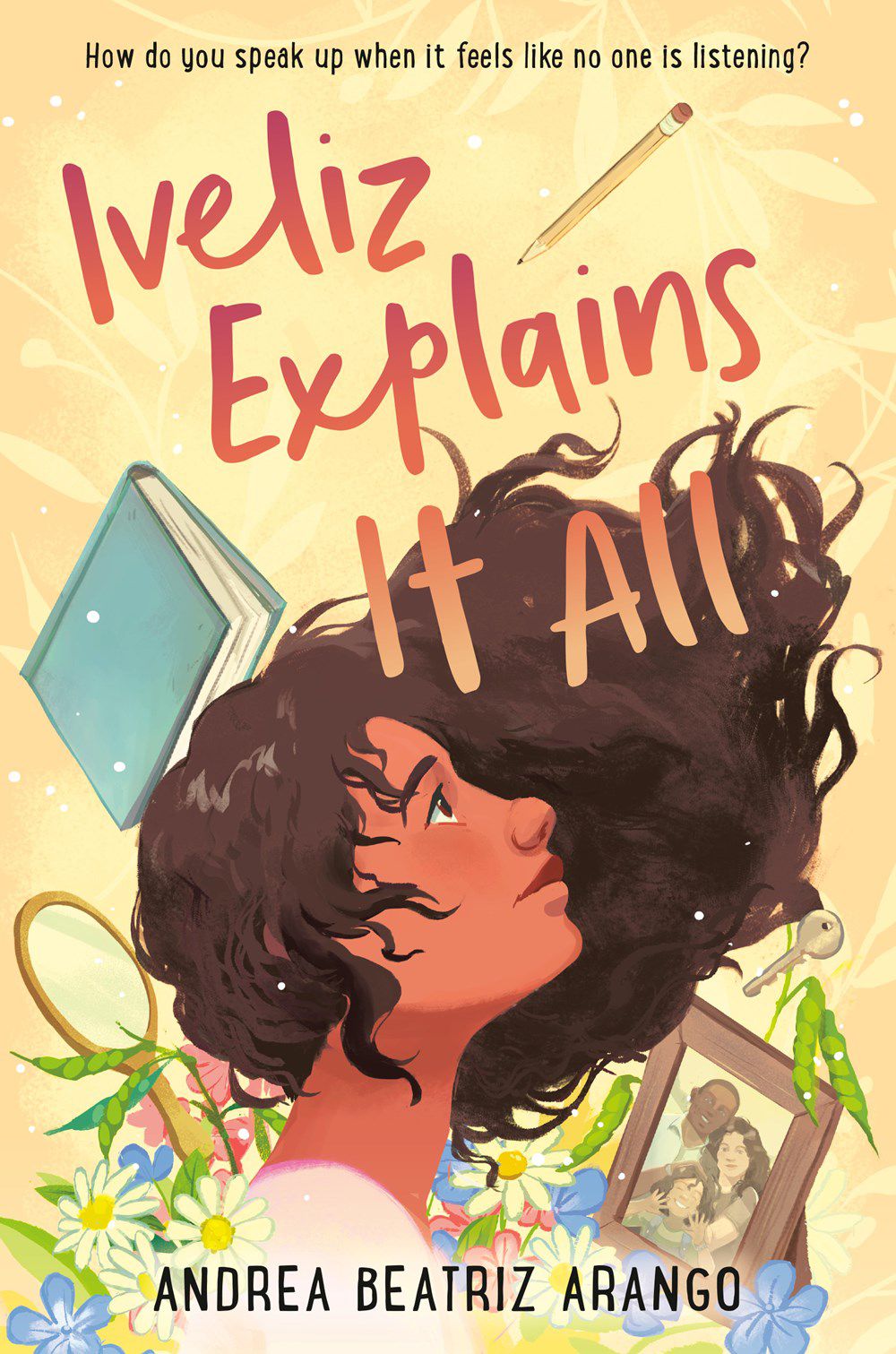 I listened to the audiobook of this middle grade in verse narrated by Raquel Merediz in a single sitting and felt raw and deeply moved afterward. It’s gorgeously written, about a young Puerto Rican girl living on the mainland and beginning middle school. Iveliz has PTSD and depression after her father died in a car crash while she was present, and she struggles with anger and being present and often finds herself missing memories. She’s also hallucinating her father. When her abuela with Alzheimer’s comes to live with Iveliz and her mother, she’s at first comforted by her presence. But her abuela’s ridicule of Iveliz’s medication and therapy sends her spiraling. Iveliz’s mental health and therapy experiences are portrayed so well. It’s a powerful book. 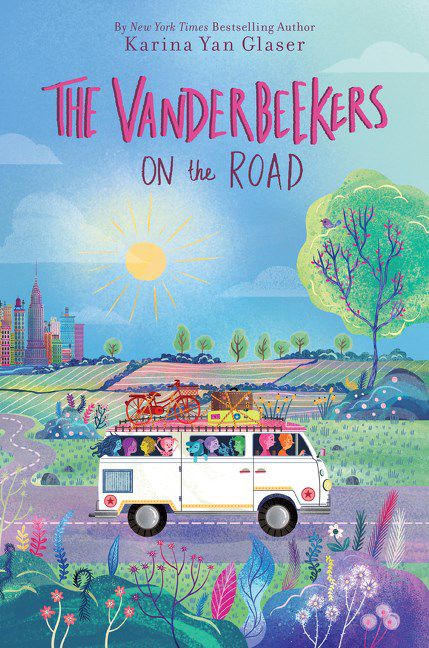 The Vanderbeekers on the Road by Karina Yan Glaser (September 20; Clarion Books)

In the sixth book in the Vanderbeekers series, which begins with The Vanderbeekers of 141st Street, the Vanderbeeker family goes on a road trip to celebrate their dad’s fortieth birthday. From New York to California in a van with nine people and four animals — nothing could go wrong, right? Ha! The car breaks down on the way to pick up their dad from a work trip in Indiana. Then the oldest siblings want to tour colleges in California while there, but the younger ones aren’t ready for their siblings to move so far or leave the family. The family has to confront changing family dynamics on the trip, but they also have lots of fun and adventures. 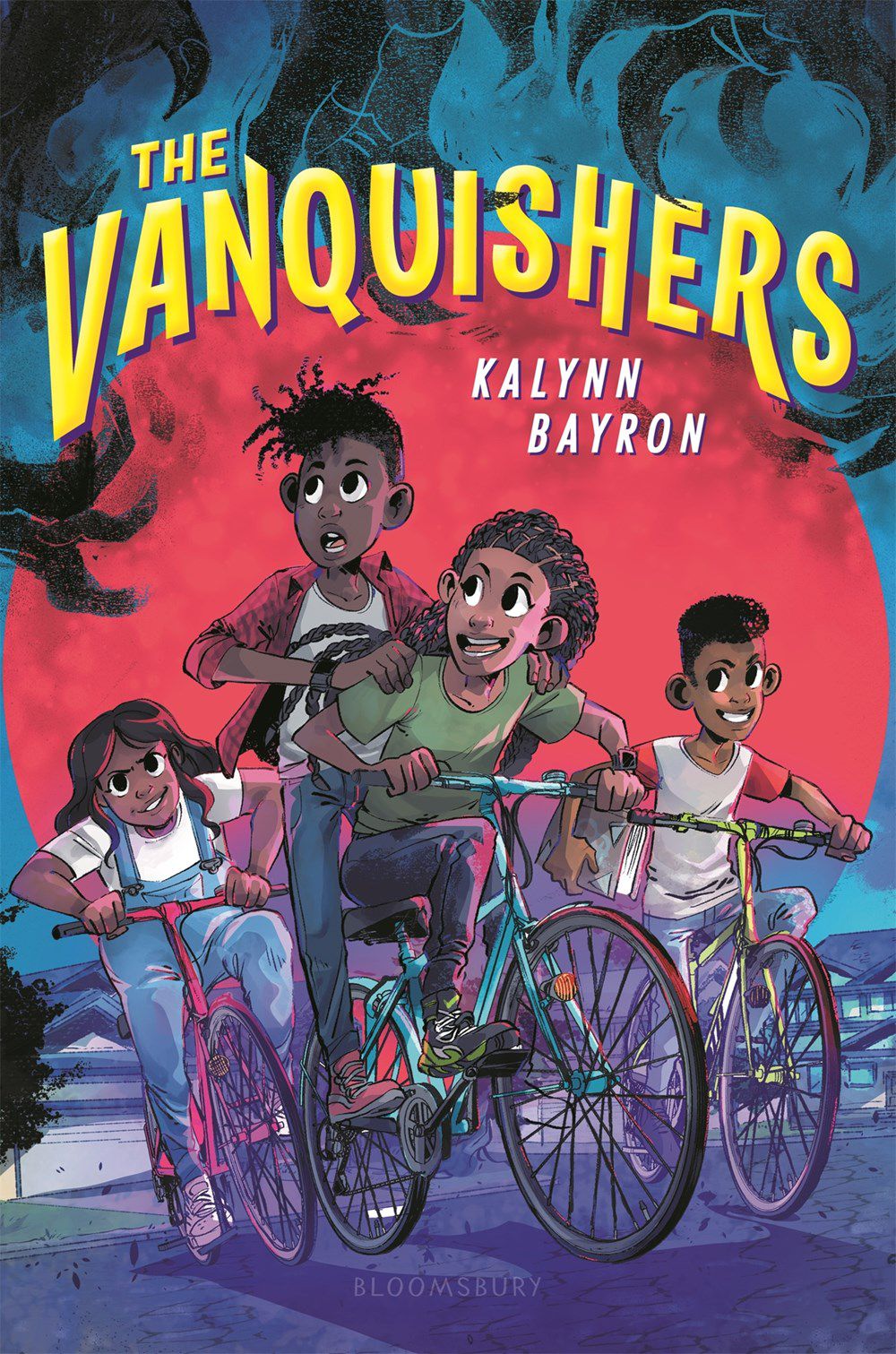 I love Kalynn Bayron’s young adult novels (This Poison Heart, Cinderella is Dead), and The Vanquishers, her middle grade debut, is just as much of a blast. San Antonio middle school BFFs Boog, Cedrick, and Jules are united in their desire to keep their parents’ obsession with protecting against vampires a secret. Even though everyone knows the Vanquishers eliminated the last of the vampires decades ago, their parents just don’t get it. When the group befriends new kid Aaron and the school’s guidance counselor starts acting a bit odd, their parents go on full vampire alert. And, to be honest, Boog and her friends do sense that something might be a bit off. But could it be that vampires have returned? This is the perfect paranormal middle grade to read for the fall. 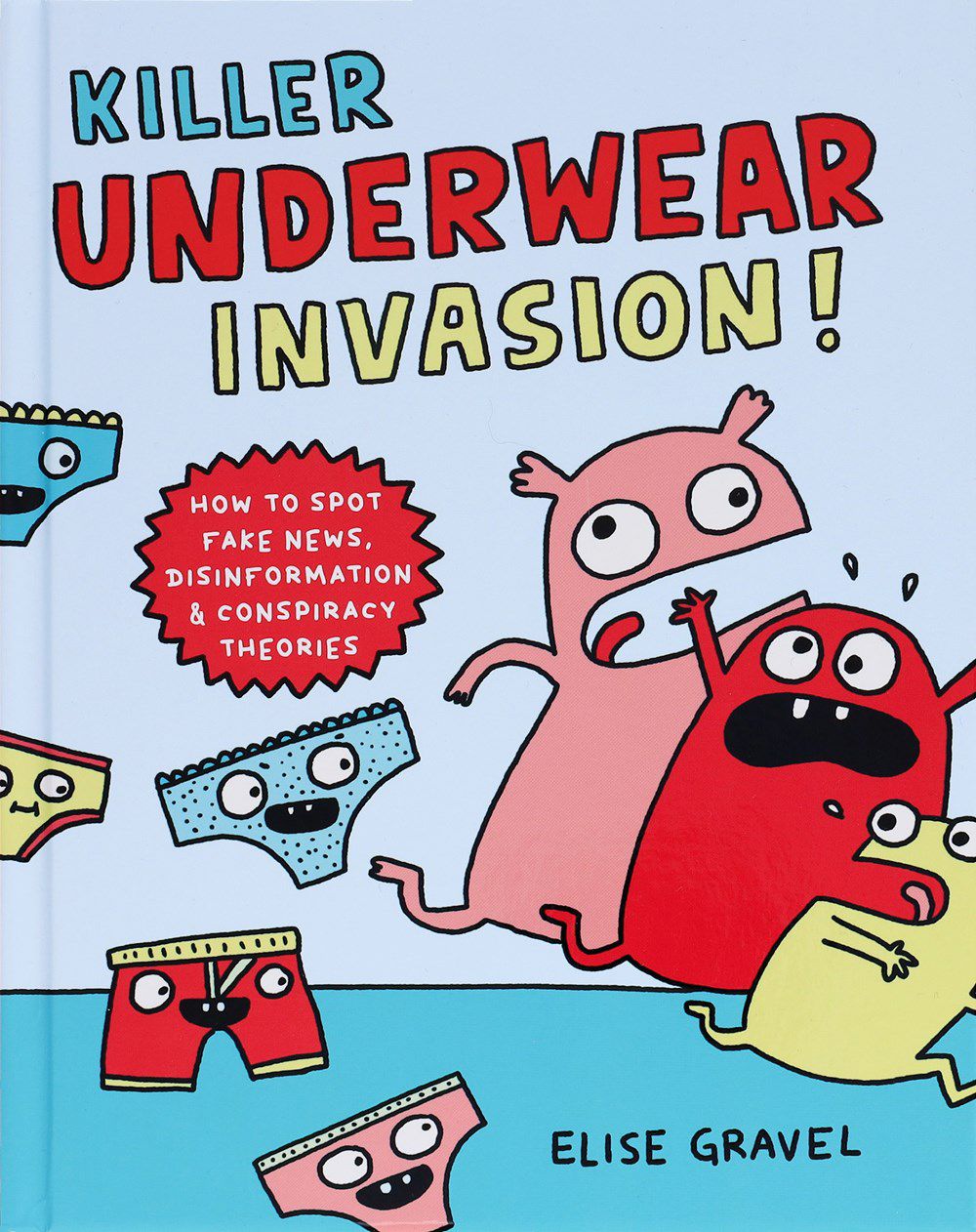 This middle grade graphic nonfiction is an ingenious introduction to media literacy for kids. Using humor and super fun illustrations, author and illustrator Elise Gravel shows how kids can spot fake news and conspiracy theories. This is a must in today’s news cycle, where so much absolute nonsense is passed off as news. I used to teach introductory research and writing to college Freshmen, and if this book had existed then, I probably would’ve had them read it! At the same time, my 4-year-old enjoyed reading excerpts for the illustrations and silly jokes. It’s a really fantastic, accessible introduction that would work great in middle school classrooms. 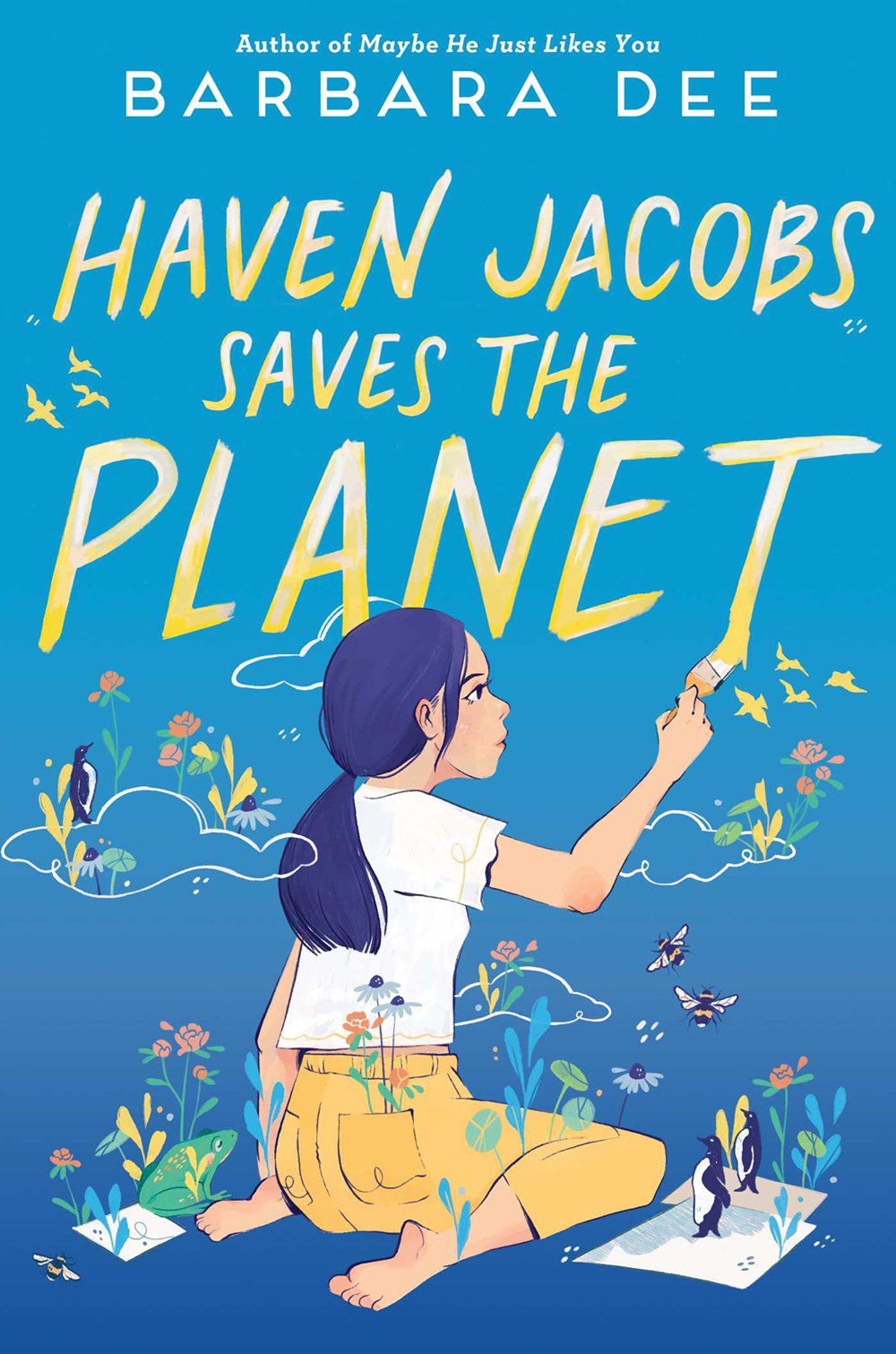 In this contemporary middle grade, Haven Jacobs has eco-anxiety. Climate change could potentially destroy the planet, yet it seems like none of the adults care enough to do anything about it. Haven is not the kind of person to be quiet when something is troubling her. But what can she do? How can one person, especially a kid, make any kind of meaningful change to help the environment? Her social studies teacher suggests she think small. Maybe she can’t eliminate climate change globally, but she could focus on the community. When her science class begins studying the river that runs through the small town, Haven and the rest of the class start noticing lots of problems. The frogs are gone, and they find harmful chemicals when they test the water. While Haven can’t solve climate change, maybe she can help the river in her community. This middle grade has great anxiety representation, and I loved how it showed kids taking action against climate change on a local level and that it takes a process to initiate change. One action isn’t enough. The audiobook narrated by Mehr Dudeja is excellent. 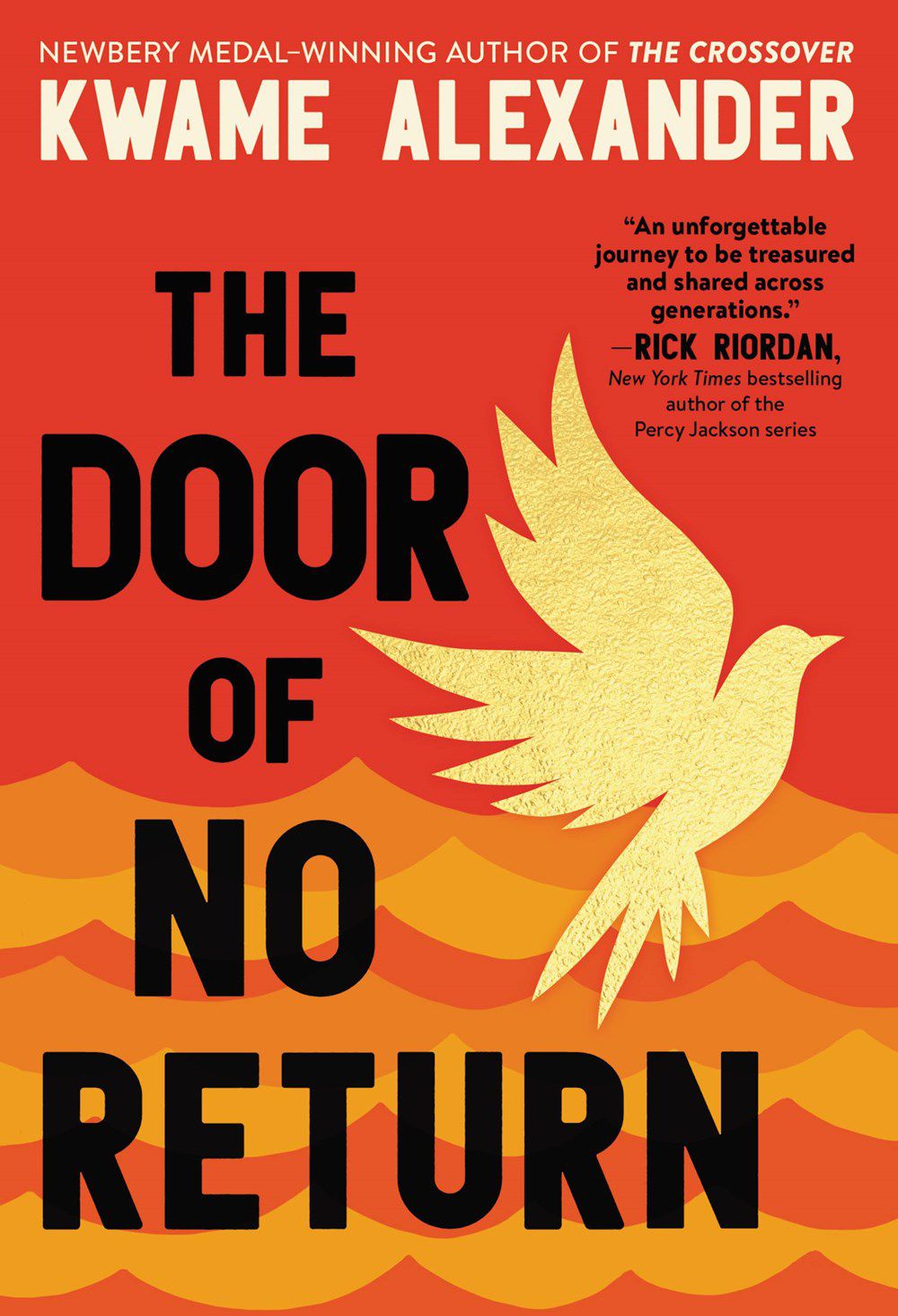 The Door of No Return by Kwame Alexander (September 27; Little, Brown Books for Young Readers)

This lyrical historical middle grade in verse takes place in 19th century Ghana. Eleven-year-old Kofi loves swimming, his family, and the girl Ama, whom he has a crush on. He hopes to impress her in an upcoming swimming contest, but before the swimming contest, his brother participates in a wrestling competition during a festival. Kofi’s life turns upside down when his brother accidentally kills his opponent. Then slave traders invade his village. This first book in a planned trilogy is a powerful and essential read.

If this list of September children’s book releases isn’t enough, check out my lists for June, July, and August, and also sign up for Book Riot’s twice-weekly children’s book newsletter.