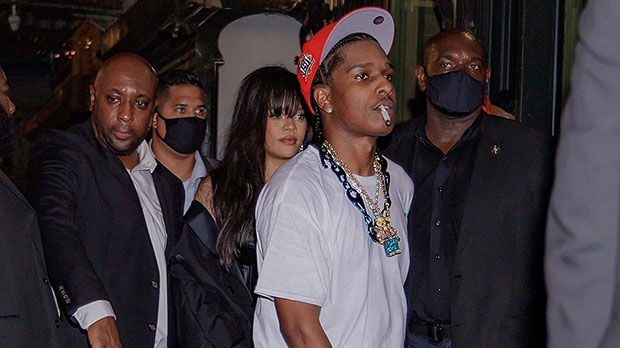 Rihanna, 34, and A$AP Rocky, 33, donned stylish outfits during their latest eventful outing at the Canary Club in New York City, NY. The singer showed off a black leather mini dress under a black jacket as the rapper wore a white t-shirt, baggy ripped light blue jeans, and a red baseball cap. She also added black heels to the look as she had her hair down and accessorized with necklaces while he added white slip-on shoes and necklaces.

The lovebirds walked outside among a crowd while leaving the club as security surrounded them to keep them safe. They didn’t pay much attention to cameras and seemed relaxed as Rocky appeared to be smoking. It was a rare night out alone for the two parents, who welcomed their first child together back in May.

Rihanna and Rocky were spotted with their new son for the first time just a month ago, when they stepped off a private jet in Los Angeles, CA. They kept the newborn away from the public eye as he sat in his carrier, though, and quickly made their way from the jet to a vehicle. The couple kept their heads down as well as they wore comfortable-looking lounge-style clothing.

Despite keeping their bundle of joy as private as possible, the famous artists are reportedly thrilled to be a mom and dad to him. Rihanna, especially, has apparently put all her focus on being a mom and has her music on hold. “Right now, her focus is on soaking up the blessing of being a new mom and bonding as a little family with Rocky,” a source EXCLUSIVELY told HollywoodLife a couple months after the birth. “He’s been such an incredible partner, he’s busy with shows and getting his album ready but if he’s not working, he’s by her side.”

“Rihanna has her hands in so many other things right now her album has taken a back seat,” another source told HollywoodLife EXCLUSIVELY in separate comments. “She’ll always be a musician and an artist and the album will come but not until the timing is right.”