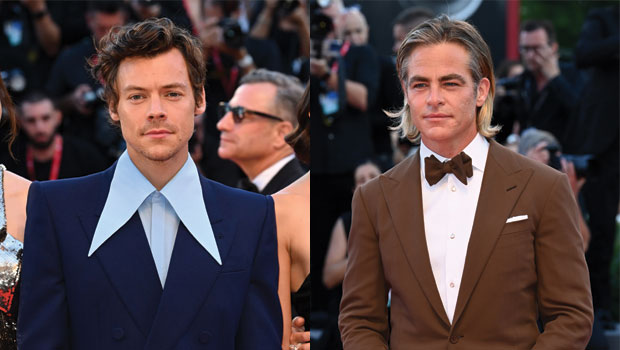 Amid the complex issues surrounding embattled film Don’t Worry Darling is a bizarre claim: that Harry Styles may have spit on Chris Pine during the movie’s Venice Film Festival premiere on Monday, September 5. A video shows an interaction that looks remarkably like that may have occurred, with Harry leaning over Chris as he takes a seat in a theater, and Chris looking stunned at his hands for several seconds.

Now, in new comments during a show, the film’s star seems to react with a hilarious quip. According to Chicks In The Office’s Ria Ciuffo and Fran Mariano, Harry offered this nugget in response to the rumored spat — er, spit: “I just popped over to Venice to spit on Chris Pine, but fear not, we’re back!”

The comment was posted to Chicks in The Office’s Instagram account on Wednesday evening, September 7. “Harry Styles has got jokes,” they captioned the pic of Harry with the quote. “Live reporting from Fran at Harry’s 10th MSG show.” Harry, who has been dating the movie’s director Olivia Wilde for almost two years, is currently performing a residency at New York’s legendary Madison Square Garden, which began on August 20 and will continue through Wednesday, September 21. He ostensibly said it during an onstage moment.

A text exchange on another slide in YouTubers’ post gave further insight into the pithy comment. In a screenshot, Ria seemingly responds to being told about the comment, writing “He said that!” to which Fran responds simply, “yes.” “Wowwwww” Ria continues the text convo, with Fran saying, “Laughing. It was very funny. He was like we’re back MSG.”

Harry’s humorous remark comes amid rumors of issues among the cast and crew of Don’t Worry Darling, including a potential feud between Olivia and the film’s star Florence Pugh. A source close to Chris said that Harry “100% did not spit on/at” Chris and added that the encounter “is a completely fabricated exchange and any suggestion otherwise is a blatant attempt to create drama that simply does not exist.”