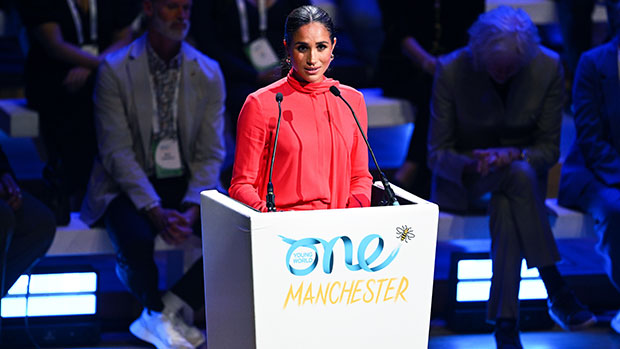 Meghan Markle, 41, expressed joy for being back in the United Kingdom on Monday. The Duchess of Sussex gave the keynote speech at the One Young World summit in Manchester and looked radiant in a red jumpsuit. She also added dangling gold earrings as her long dark hair was pulled back into a ponytail and she wore natural-looking makeup.

Meghan was joined by her husband Prince Harry, 37, who wore a black suit and tie, at the summit and impressed many when she took to the podium to give some inspirational words to the audience, which consisted of delegates from over 200 countries. In the speech, she said she it was “very nice to be back in the U.K.” and talked about being a young woman and finding her way to where she is now. As a counselor with the organization since 2014, she also encouraged others to change the world for the better and admitted that she “wasn’t sure” she “was good enough” to be there during her first year at the event.

“You are the ones driving the positive and necessary change across the globe now, in this very moment. You are the future, you are the present,” she said to the cheering and supportive crowd.

The beauty then took a moment to give a shout out to Harry as she expressed how happy she was to bring him along to the memorable event. The crowd didn’t hesitate to cheer as he sat among them and smiled, looking very proud of his wife. “I am thrilled that my husband is able to join me here this time, to be able to see and witness firsthand my respect for this incredible organization and all that it provides, as well as accomplishes,” Meghan said about him. “One Young World has been an integral part of my life for so many years before I met him, so to meet again here on U.K. soil with him by my side, makes it all feel full circle.”

She concluded the speech with an uplifting message about action and ability. “We often hear people say ‘The time is now,’ but I’m going to double down on that, by saying your time is now,” she said. “The important work can’t wait for tomorrow.”

Meghan and Harry’s appearance at the One Young World summit is just one of a few appearances they have planned for the week. They will attend the Invictus Games’ One Year to Go event in Germany on Tuesday and then return to the U.K. to attend the WellChild Awards on Thursday.