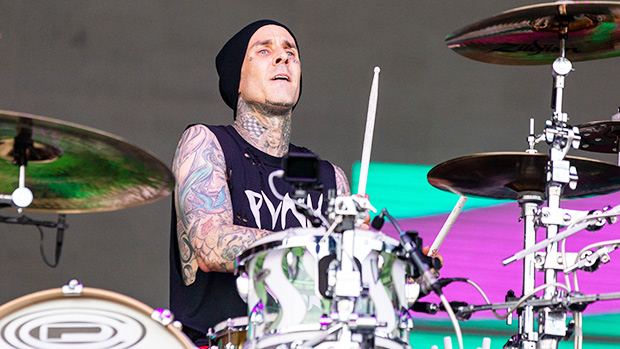 The first star-studded Taylor Hawkins Tribute Show took place at Wembley Stadium on Saturday (Sept. 3), and Travis Barker was one of the many who came out to celebrate the life and legacy of the Foo Fighters drummer. Travis, 46, celebrated Taylor, who passed away in March at age 50, by playing “The Pretender” with Dave Grohl and the band live. Travis gave an energetic performance as he played directly behind Dave, wearing just a beanie and a necklace. The Blink 182 icon danced along as Dave sang early on in the song, clearly moved by the moment and the music.

Travis gave fans a few behind-the-scenes looks via his Instagram Story in the days leading up to the concert. On Sept. 1, Travis posted a photo of his dressing room at Wembley Stadium. He also shared a photo of his drum set during rehearsals. His wife, Kourtney Kardashian, also posted to her (and the official POOSH) Instagram the adventures she had with Travis ahead of this celebration of Hawkins’ life.

Taylor’s death hit Travis hard. “I don’t have the words,” he wrote on Mar. 26, captioning a black-and-white photo of Taylor relaxing backstage. “Sad to write this or to never see you again. I’ll never forget Laguna Beach days when I was a trash man playing in a punk rock band, and you were playing with Alanis [Morrisette]. You’d come watch me play in dive bars and be like, ‘kid you’re a star.’ And I thought you were crazy, but you gave me so much hope and determination.”

“Years later we toured together with [Blink-182] and Foo’s in Australia,” continued Barker, “and I have the best memories of smoking cigarettes in the restroom of flights we were on together and watching your set every night. To say I’ll miss you my friend isn’t enough. Till the next time we talk drums and smoke in the boys room … Rest In Peace.”

In April, Travis celebrated his friend and their bond by getting a tattoo. “HAWK forever,” he captioned a gallery of him hitting up the Shamrock Social Club in Hollywood with Kourtney and his friend/photographer, Daniel Rojas. Travis had Mark Mahoney, an artist dubbed the “high priest of Hollywood tattoo artists,” ink a soaring hawk on his leg. It was a beautiful tribute to a dear friend.

Selena Gomez Is Obsessed With These UGG Boots and They’re 62% Off on Amazon Now
Non-binary, pansexual deity Janelle Monáe to be honoured for their tireless LGBTQ+ advocacy
Victoria Beckham Appears to Have Removed David Beckham Initials Tattoo
Miles Teller Jokes He ‘Grew A Mustache’ For ‘Top Gun’ While Tom Cruise ‘Did His Own Stunts’ On ‘SNL’
Kareem Abdul-Jabbar Rips Kyrie Over Alex Jones Vid, Sponsors Should Drop Him