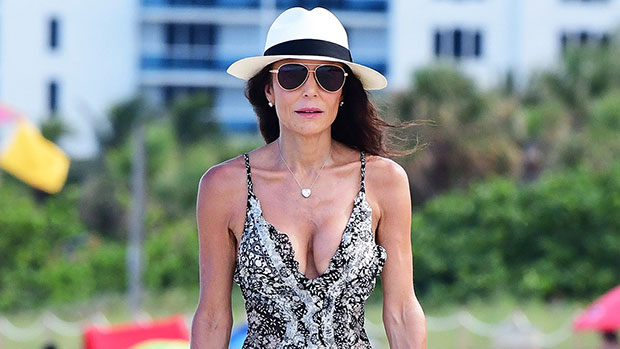 Bethenny Frankel, 51, always keeps it real, and on Wednesday, August 31 she gave her honest opinion on social media filters. The Skinnygirl entrepreneur made a point that filtering is “deceptive” by posting side-by-side Instagram photos of herself in a blue bikini on the beach. Bethenny did not photoshop or filter herself in the second photo, though she looked equally as gorgeous.

In her caption, Bethenny explained that the edited photo “is NOT what I look like,” and she said she’s “not vain” and always shows her authentic self to her fans. “But if I posted a version of this every day you might start to believe that it might be,” Bethenny said, in reference to the filtered and photoshopped snapshot. “This is just how distorted this has all gotten.”

Then, the RHONY alum called out filtering for being “deceptive.” She continued, “It makes women feel badly about themselves. It makes young girls insecure and obsessed with an unattainable perfection. It makes middle aged women and mothers feel insecure about themselves. This creates a false ideal for men. It’s the opposite of inspirational. It’s destructive. It’s irresponsible. It’s insecure and it’s inaccurate. There is a line between making an effort to look pretty and an outright falsehood.”

Bethenny concluded her message by telling her 2.7M followers to swipe through her post and see the differences between the edited and unedited photos. She included the hashtags “#thisisme”, “#speakyourtruth”, and “#liveauthentic.” Some of Bethenny’s most famous followers like actress Elisabeth Moss and pro dancer Peta Murgatroyd applauded Bethenny for her message about body image on social media.

Bethenny has been making headlines for her gorgeous looks all summer long. On the last weekend of August, she was photographed on the beach in Hamptons wearing a stylish white one-piece swimsuit with a colorful design around the upper waist and a straw hat. She also rocked sunglasses at one point and spent some time in the water to cool off from the heat.

Also during the Hamptons trip, Bethenny showed off several cute long dresses on Instagram, including a yellow, red, and white patterned on, a green silky one under a white shawl, and a blue, white, and pink patterned one with an opened section in the bottom front and light blue slip-on shoes. With a new season of the year approaching, we can’t wait to see all the cute fall outfits that Bethenny conjures up!

National Relaxation Day: J.Lo & More Stars Lounging By The Pool Or At The Beach, Finding Their Zen