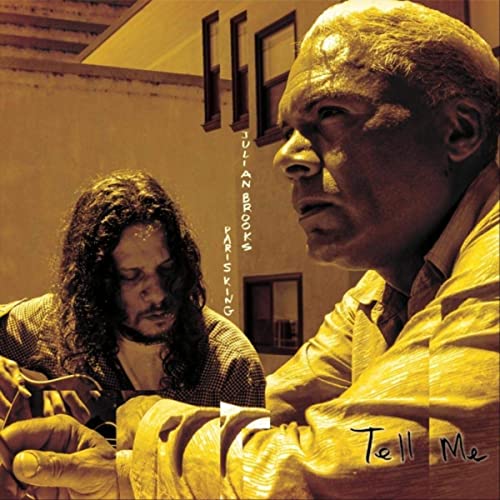 “Snakebite” is the latest single by NorCal rockers, Julian Brooks and Paris King. Not exactly Simon and Garfunkel or Belle and Sebastian, Brooks and King are forging their own path, and reimagining the notion of a musical duo. It’s not entirely clear who contributes what from a compositional standpoint, but both are defining figures in their recent effort. The Red Bull fueled, “Snakebite,” starts at around a 100 and stays there for the entirety of the track. You might even accuse the drums of being a bit too busy, but it ultimately suits the song’s jittery texture.

Not much is known about the origins of Brooks and King, or exactly how they came together. It certainly appears to be a case of opposites attract as Brooks seems to run towards the spotlight, and King, away. In any event, they seem to be the yin to one another’s yang. “Snakebite,” embodies the essence of the dynamic duo’s sound, while being a decidedly simple and straightforward song. In fact, the track is more or less a traditional Punk/Garage Rock tune, slightly tweaked to be more accessible.

There’s nothing particularly novel or bombastic about “Snakebite,” yet it still ends up being highly engaging and rather thrilling. As alluded to earlier, the tempo of the song is manic and relentless, but is an effective contrast to Brook’s fashionable delivery. Brooks is like a Latin David Bowie, with a seasoning of Iggy Pop and the screen presence of Ricky Martin. His voice is melodic but more suited for songs in a minor key. Paris King is the one who gives “Snakebite,” an urgency it wouldn’t otherwise have.

The music video for “Snakebite” is almost as essential as the song itself. A 6 minute mini epic, it’s a production on par with an Indie film and a modest budget. Having been nominated for a ridiculous amount of awards, and bagging over a dozen of them, the video is an event in and of itself. Julian Brooks has a background in film and he creates a visual feast, filled with spooky characters and absurd scenarios. The video for “Snakebite” is more than worth your time and gives you a better appreciation for the track itself.

We simply don’t see or hear the likes of an act such as Julian Brooks and Paris King much anymore. Their influences seem most rooted in a time gone by. They seem focused on what they’re doing, as opposed to what’s happening around them. They also seem to place faith in capturing the audience’s imagination, and unafraid of inevitable ridicule. Using the power of the music video and visual accommodation, they’ve taken a good song and embellished it into something rather sensational. Something of a sleeper track, “Snakebite,” will work its way into your bloodstream and consistently circulate. You can check out the song online and the video on