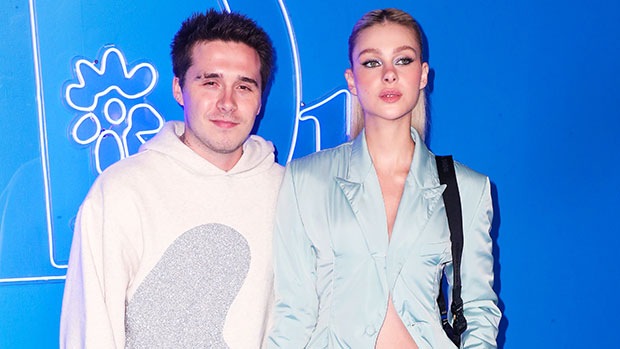 Brooklyn Beckham, 23, and Nicola Peltz, 27, were still in full honeymoon-mode while out in LA on Thursday, May 20. The newly married couple could barely keep their hands off one another during Dior’s Spring-Summer 2023 Men’s fashion show.

Brooklyn wrapped his arm around Nicola sweetly, before leaning in to give her a peck on the neck. The Transformers: Age Of Extinction actress looked ultra-chic in a shiny, baby blue suit, open just a bit to reveal her taut tummy. Adding a millennium-inspired touch she wore silver eyeshadow and had her icy, blonde hair pinned behind her ears neatly.

Up-and-coming photog Brooklyn went for a more casual look. He wore a grey and white abstract-designed hoodie with the sleeves pulled down long enough to hide his hands. Shiny nylon pants and black sneakers tied the low-key look together.

The fashion show was one in just a recent slew of red carpet outings for the newly minted Mr. and Mrs. After tying the knot in a lavish Palm Beach, Florida ceremony on Apr. 9, 2022, they made quite the debut with an appearance at the 2022 Met Gala. There, the pair looked made to match in a pair of stunning Valentino ensembles.

Brooklyn Beckham’s Siblings: Everything About His Relationship With His 2 Brothers & Sister Harper

The duo first met in 2017 but didn’t start dating until two years later. Brooklyn popped the question in July 2020 and it’s been a fairytale since. Though the couple was on the West Coast for the fashion show, Nicola and Brooklyn offloaded their $10.5 million Beverly Hills mansion in Mar. 2022 to relocate to Miami, closer to where both their families have roots.