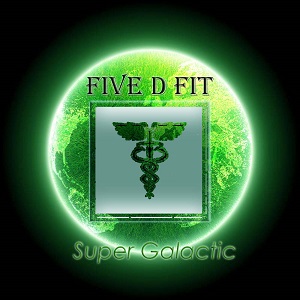 There’s been a staggering number of interesting new rock songs debuting through the pandemic, and while it hasn’t done much for the live concert circuit, this has started to feel like a new era for studio recording. Throwing their hats into the ring as a rock band this spring are FiveDFit, whose new single “Super Galactic” has all of the punch of a classic rock track with the polish of something more modern. There are a lot of puritan elements to “Super Galactic,” from the construction of the hook to the glistening tone of the guitar parts, but I don’t get the feeling we’re listening to players incapable of evolving in FiveDFit. If anything, this is our first proper introduction to their style.

The bottom end of this single is pretty heavy, but it doesn’t anchor the groove ahead of the chorus. The flow of the rhythm here is pretty sweet, allowing for the guitar parts to feel unrestricted without actually being super excessive to any genuine extent. There’s never a second of synthesized harmony coming across the percussion because there’s plenty in this mix for our singer to connect with. FiveDFit might not be veterans as a band, but they definitely are playing like this isn’t their first rodeo in “Super Galactic,” which is what we need to see and hear more of in rock bands in the underground right now. Forget throwbacks – if you’re all about intricacy, you’re cut out for this next chapter in rock n’ roll history.

Where a lot of other singles would have had a beat dictating the pace of the verses, the opposite is going on in “Super Galactic,” which is yet another department in which FiveDFit is setting itself apart from the competition. I hate forced percussive indulgence, but instead of filling up the backend with a lot of fake drum intensity, this band is keeping things simple and rejecting the elaborate underpinning of a more complicated groove. There’s actually a lot that their indie peers could learn from this group, starting with how seriously the players here are taking even the most routine of elements in the music. Everything matters to these guys, and you don’t have to be a professional rock critic to hear their investment in the music.

I’ll have to see them live and in person to appreciate their complete depth as a unit, but what FiveDFit advertises as their signature sound in this studio version of “Super Galactic” is very exciting to me as a listener. Rock is something that has to be developed all at once rather than slowly, and if this band is smart, they’re going to act on the steam they’re gathering in the business soon, as to keep what they’ve got with the fans growing on a regular basis. This is not the time for backing down from the work, but from what I gather just in the way they perform together in this single, I don’t think it’s going to be hard getting FiveDFit back into the studio again.